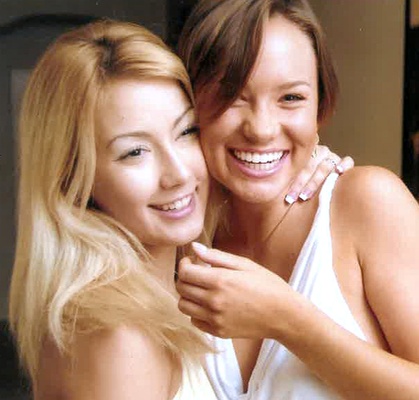 When Joie Nicole Kinney moved to Los Angeles in 2004, she was 16 and alone.

The aspiring actress rented an apartment and enrolled herself in Hollywood High School. She earned her diploma and kept it framed in her Hollywood apartment, along with autographs of old movie stars and photos of her idols Marilyn Monroe and Stevie Nicks, friend Julia Bloomquist said. She worked as an extra in movies, and catered to her beloved pets, a chihuahua named Puppy and two cats, Olive and Buttercup.

But on July 6, some 12 years after she arrived in L.A., her body was found in a West Hollywood trash bin. She was 28.

“She was one of the warmest, friendliest people I ever met,” said Bloomquist, who knew Kinney through a mutual friend.

“We came from very different backgrounds, but she had this sincere, loving quality that let her be friends with anybody,” Bloomquist said. “That was the really lovely thing about her — she could find common ground with any person.”

They were close friends for six years, Bloomquist said, but slowly, the girl who loved to sing in the car and take long walks with her dog started “partying more and drinking more,” Bloomquist said. “Those weren’t things that we shared.”

Kinney was born in Washington, D.C. Her father, a wealthy inventor and business owner, drowned in 1995. He left his daughter a sizable inheritance, Bloomquist said, which enabled her to move across country when she was just a teenager.

“She loved her mom, but she told me the police were called to their house a lot and they moved around a lot,” Bloomquist said. “When she came here, she was always by herself, paying her own bills. Occasionally her mom came to visit her, but they had more of a friendship relationship than mother-daughter relationship.”

About six years into their friendship, Bloomquist said she gave Kinney an ultimatum about drinking. “I told her, if she wanted to hang out with me, she had to do healthy activities.”

Shortly thereafter, Kinney’s roommate called and begged Bloomquist for help. She said Kinney wasn’t paying rent and wouldn’t come out of her room.

“Her alcoholism had gotten out of control,” Bloomquist said. “She was at the stage of her addiction where she needed to be in treatment.”

Bloomquist did the only thing she could think to do: She bought tickets for Kinney to fly to West Virginia to be with her mother.

Bloomquist said she heard through friends that Kinney spent time in West Virginia, New York and Colorado before returning to Los Angeles. The two women never spoke again.  After she heard Kinney had died, Bloomquist said she called the L.A. County Sheriff’s Department, worried that Kinney's animals were stranded somewhere. Investigators told her that Kinney’s pets were safe with family on the East Coast.

The Los Angeles County coroner's office has not made a final ruling on Kinney's cause of death, pending results from toxicology tests. But Sheriff's Lt. Eddie Hernandez said medical examiners determined that Kinney had been strangled.

Abdulla Tario Camran, a 29-year-old white man who investigators said had a “dating relationship” with Kinney, has been charged with murder in connection with her death. He pleaded not guilty Aug. 4, according to records from the Los Angeles County district attorney's office. His next court date is Thursday at the Los Angeles County Superior Court's Airport courthouse.

Bloomquist wants to set the record straight about her friend and sent her last memories about Kinney by email, because she didn’t want to cry during an interview.

“Joie was a tiny ray of sunshine and an endlessly loyal friend,” she wrote, “I wish I could change the way her life ended, but I can't. The only thing I can do now is stand up and say how much she mattered."

"Just like all of us, she was a complex combination of flaws and wonderful attributes. I'll still be her friend for the rest of my life. And any time I'm ever singing loudly to the radio with the car windows down, comparing horoscopes, or delighting in how wonderful dogs are, you can bet she'll be right there with me.”

I grew up with Joie, and I feel that this article is based solely on her substance abuse issues. Let us not forget that a human was killed and put in a dumpster. No one deserves that, especially this woman.