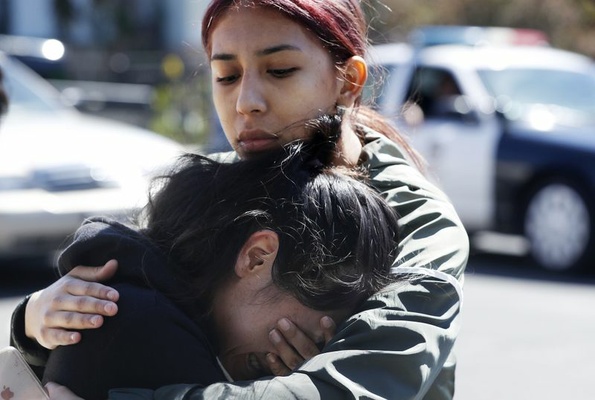 Steven Lopez was well known around the tight-knit Mid-City neighborhood where he grew up. Neighbors knew the struggles he endured.

His family thought he was finally in the clear. But last March, Lopez was shot and killed near his home in the 4700 block of West 17th Street in Mid-City.

On Tuesday, authorities asked for the public’s help in solving the case and publicized a $50,000 reward for information in the killing.

His mother, Flavia Lopez, spoke through tears near the spot where her son collapsed and later died.

Lopez was home-schooled and couldn’t work because of his numerous surgeries, family members said. He had speech and motor issues. He suffered from seizures.

LAPD Lt. John Radtke said that Lopez, who frequently wore a beanie or hat to cover the scars on his head, was near his neighbor’s front lawn on his bike about 10 p.m. on March 18, 2018, when two people walked up and shot him multiple times.

The assailants ran east and got into a dark sedan.

“There are gangs in this neighborhood, but this is a tight-knit community here in the Mid-City,” Radtke said. “There are people out there right now that know exactly what happened.”

Lopez’s sister, Liana, 26, heard the shots. She ran outside to find her brother wounded. He died in her arms. On Tuesday during a press conference, she said it was still hard to talk about what happened last year. Tears streamed down her face.

Detectives said that Lopez was likely not the target in the shooting, but rather, someone who may have been mistaken for a gang member.

At the time, there was a gang conflict in the area, so gang members may have been looking for someone who looked like a rival. Lopez was not a gang member.

Nadine Hijar, 26, grew up with Steven and his family and said she thinks the shooting was a result of mistaken identity.

“Sometimes we’re not safe just standing outside,” she said.

Thats sad cause he wasnt a gang member i grew up there on a street over in the 90s there was shootings everyday. I drove around there to see how the neighborhood has change its not as crazy like before but i did see some graffiti of f13 florencia gang and R20 rolling 20s blood and playboys13 and bps black p stonesand geer crips one of those gangs are probably responsible for mistaking that dude man sorry for your brother passing i still know people that live in that area i can ask. R.i.p to steven

It sad to think that you can just be standing there and get killed.