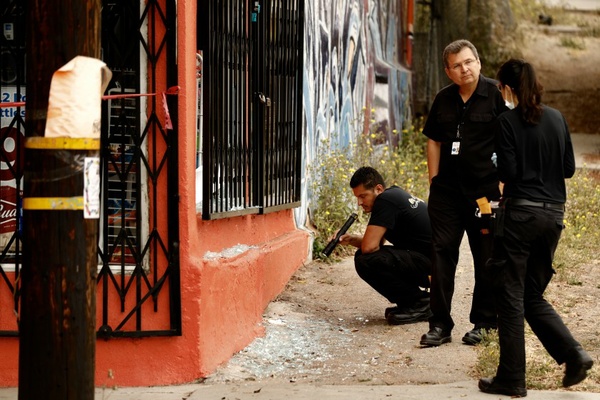 Roberto Rene Gabriel, a 33-year-old Latino, died Monday, Aug. 19, after he was shot by Los Angeles police near Alhambra and Belleglade avenues in El Sereno, according to Los Angeles County coroner’s records.

On Aug. 18, shortly before 11:30 p.m., officers from the Los Angeles Police Department’s Hollenbeck Division were in a patrol SUV about to approach a red traffic light when they were suddenly shot at, according to a news release from the department.

A round hit the driver’s side door of the SUV and the gunman ran west and into an alley north of Alhambra Avenue, police said.

The officers called for help and then tried to find the person. Anticipating that the gunman would try to leave the area through a nearby alley, the officers drove to Alhambra and Belleglade avenues and spotted the man on the sidewalk.

The officers got out of their SUV and the man fired at them again, prompting the officers to fire back.

The man then fled east on Alhambra Avenue and ran into other responding officers. The man, identified as Gabriel, was struck by gunfire and taken to a hospital.

A gun was recovered at the scene.

The incident remains under investigation by the LAPD. The shooting will also be reviewed by the Los Angeles County district attorney’s office and the office of the inspector general.

Share a memory or thought about Roberto Rene Gabriel

The violence in this country must be addressed