Social media are reshaping policing and conversations about violence

The two men lay motionless on the sidewalk outside a South L.A. carwash, pools of blood spilling from their heads. With the paramedics still on their way, people crowded around the men and pulled out their phones.

One man would live, but the family of the man who died found out about it through the graphic photo.

For some, the photo — and its distribution — was a brazen, inappropriate act. The next day, members of a Los Angeles City Council committee on gangs and public works denounced the posting.

"It was just disgusting. It was just immoral," Councilman Joe Buscaino, a former police officer, told the committee.

But the photo also is an example of how social media is changing policing — and how people in communities such as South L.A. are reacting to violence. 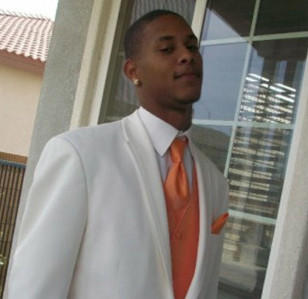 Just as social media can help investigators, it can also be a hindrance. Recently, when a man was killed in South L.A., rumors of retaliatory violence spread through the hashtag #100days100nights, creating a frenzy that officers had to tamp down. And the photo of the man killed outside the carwash, 23-year-old Delshon Hayes, again made social media part of the conversation in the community.

"I think people are getting more brave with it," said LAPD Det. Young Mun, who is investigating Hayes' killing.

Although people posting graphic images on social media is nothing new, Mun said the photo of Hayes was the first time that he had arrived at a homicide scene after a photograph had already been posted.

"It went up there really fast," he said.

In some neighborhoods, family members will anticipate a homicide detective's arrival — they've already found out through text messages or Facebook.

"The days of going up and knocking on somebody's door in a community like Los Angeles … those days are so far gone," Tingirides said.

What people post to social media could also signal how desensitized some are to violence, said David Pyrooz, an assistant professor of sociology at the University of Colorado who has studied social media and gangs.

Pyrooz said it has become normal to pull out a phone any time there's some sort of action.

"There's no rules when it comes to your everyday citizen when you're posting things on Twitter," he said.

Social media companies have varying policies with graphic images. According to Twitter's policy, the company will remove imagery of bodies in "certain circumstances." Family members and other "authorized individuals" can ask for images to be removed by filling out a privacy form.

According to Facebook's policy, the company takes the context of a post into account. For instance, if a person posts something that celebrates violence, it would violate community standards. But it wouldn't if it were deemed an aspect of free speech such as raising awareness. Instagram did not respond to a request for comment.

Matthew Sutton, a barber who lives in the area where Hayes was killed, reposted the bloody image on his Instagram account. He said he wanted to be bold and express an opinion.

The photograph, he said, was an example of the black-on-black violence he feels goes unnoticed by the media and the public.

"It's time for me to say something," he said. "I've been living with that my whole life. Let's start speaking up."

So often we focus on the (CRIME) NOT THE LIVES SHATTERED. One survivor recall his life to me, now after social media allow posted photo's of his shooting...Which left one dead his friend. After SURGERY he was immediatly release to return basically to the scene of the crime his home in DEATH ALLEY. Did i mention the suspect is still at large. AND U WONDER WHY BLACKS DONT go to court!!!! Anyone else heard of witness protection program?? Also the victm was denied victim of crime compensation, get this for being on PAROLE this makes him ineligible yet you can go to jail for shooting. The police will be at your door if you log on a child pornography site but photos of those that lose there life is not monitored. Looks like a INSENSITIVITY issue not security sceening issues.ALL LIVES MATTER http://articles.latimes.com/1999/may/28/local/me-41895 today..

U got the photo-op..so I'm sure u gave the police a description of the shooter and his get away car....right?..oh I forgot..we don't talk to police...

So the pictures are condemned but the murders continue. Maybe if people see the pictures they will eventually ask the police to do what is necessary.

what hurt me was no one sat there beside them to try and perhaps comfort them. I think it's sad that this young man was murdered in front of his child, and wanted so much to witness the birth of his son. He didn't deserve this and I really hope we as a community stand up and hold people accountable for their actions. And get these politicians that are supposedly representing our district community GONE! it's take a village. and because we say Black Lives Matter does not mean no other race does not. When we say SAVE THE WHALES. no one is saying F$&@ the seals.

They want to censor social media pics now? I hope people start posting more. Black lives don't matter. We're too busy killing each other. Don't expect other races to treat us any better than we treat ourselves

Maybe if the people who live in low crime neighborhoods saw just how gory some shootings are, maybe they will start to ask questions.