About 12:45 p.m., people were gathered at a car wash in the area. A person approached Hayes and a 34-year-old black man and began shooting into a crowd, said LAPD Det. Rob Lait.

Hayes was pronounced dead at the scene, according to coroner’s records.

The 34-year-old man, who was also struck, was hospitalized and is expected to survive.  Mun said that Hayes and the 34-year-old man knew each other but did not know whom the gunman was targeting.

The night after the shooting, a group of people gathered for a memorial for Hayes at the car wash. Hayes’ aunt, Janice, who declined to give her last name in fear for her safety, said that Hayes leaves behind a 5-year-old son and a baby on the way.

His grandmother, Beverly Hayes, said that last time she saw Hayes was at a baby shower for the unborn child.

“That child will never see his father,” she said. 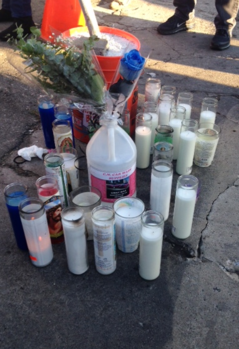 A few days before he was shot, Hayes and his son got haircuts together.

FOR THE RECORD: A previous version of this post said the shooting occurred in Harvard Park.

Do you have information to share about the life of Delshon Eugene Hayes Jr. ? The Homicide Report needs your help. Please fill out this form or e-mail us at homicidereport@latimes.com.

Share a memory or thought about Delshon Eugene Hayes Jr.

RIP i love you its been 5 years since you have been gon):i miss you so much

Son as I sit here and look over this day I wish like heck that this have never happened to you. Before you was born I will pray to God if he can just give me a healthy baby boy, and that’s just what he did. The day I lost you I lost a piece of my soul. You were my first born and you taught me so much at a early age. I had you when I was 16 and never in a million years I thought I would loose you to these streets of Los Angeles. But I pray every day that God will bring justice to your case. You never deserve for your life to be taken the way that was, and most of all how they showed your lifeless body on social media. Son I will never give up on finding the justice for your death.

Love you always Your Mother Tara💙

@intelligent hoodlum, regardless of how he conducted himself around most folks he did not deserve to be killed. I was always taught that two wrongs never make a right. And in the end, the suffering and pain is still there.

It's been about two months, and I still find myself weeping when I think about Delshon. This is so unbelievable, he was one of the few people that did not bother anyone and kept his personal life private! I can't grasp why this happened only God knows and everything happens for a reason but this is not something I'm willing to accept. A person who smile could change your whole mood, a person who presence you loved to be in gone too soon. Everything we talked he talked about his little guy, and that's what I admired about him the most... His love for his son ! I'm in such disbelief still until this day. We miss you down here Goldee can you please comfort your brother and your family and comfort me too. I love you I wish I could have told you that when I was last with you.

As a people, we need to bring light to this situation. Take a stand against negativity and you will in fact make a huge difference. Instead of allowing this BS to continue, we need to stop soliciting it within our music/ entertainment. Stop allowing our own brothers and sisters to profit off of our very own demise (Straight Outta Compton.) We need to hold ourselves as well as our celebrities accountable for what goes on in our very own neighborhoods.

RIP Goldee 4! From what I understand, he Did Not conduct himself like that around most folks, but he was definitely with it (52 Wayz)!

Although we often hear of the violent loss of our young, black males , this loss is especially hard to handle . This young man kept joy on his face and in his heart . This young man made many people smile and feel loved . This young man was the epitome of a father who truly loved his son and made sure every moment he could spend with the little boy mattered and being so excited to see his unborn child be born . This young man loved his mother, kids, siblings, aunties, uncles, Cousins , grandparents, homies, and girlfriend with all his heart and he was a shining light in all their lives . It won't be the same without his beautiful smile or happy voice brightening up a room, it won't be the same not being able to witness his addiction to raising his son and seeing that little boys eyes when his dad entered a room. Delshon was a wonderful spirit who was an angel on earth that God shared with everyone . This is so hard to accept and it will not be easy days but God needed his angel back and we must live on. I pray his children will always be reminded of the wonderful and loving dad that they had, i hope they grow up and make him proud. Shon loves his life and I wish he never had to leave so soon and so quick but we can never put a question mark where the Lord has put a period . Bless your soul Shon, you'll never be forgotten ....by those who knew you and those who wished they had gotten to meet you . I pray the family can heal someday . I know your in heaven in a beautiful car , singing and smiling ....just loving being you .

It was on Hobart and Florence. Not on Harvard

Everytime I hear about one of our children being shot dead for no apparent reason, my heart breaks. When is this nonsense going to stop?! I have a son and fear for his life everyday....if the police don't kill him, some other young, stupid, uneducated, black male will! People, we have got to come together and embrace our young black males. First, they need to be taught about God and led to accept him as their Lord and Savior. Second, they need to know their history. Third, they need to be educated both in a classroom and by their parents or some other adult with good, common, God-fearing sense, to explain to them the pain that is inflicted on a family when losing a loved one to such unnecessary, random violence. When my son was 15, gang members approached him in front of our home. I thank God to this day (my son is now 27) that HE put me outside at that very moment to step in and put the devil in his place! To make a long story short, I confronted those young, gang-members by telling them that I love them, God loves them, and to leave my son alone. I told them that my son does not know them, and he is not in a gang. I explained to them that as a mother, I love my son and them too, and that I'm sick and tired of the random violence. I told them to accept Christ, get in their car, and go home. Surprisingly, they listened (there were 4 of them). They left.

To my Black Brothers....when is this silliness going to end, Everytime I come to this post it is always someone young dead. I hate to hear about anyone dying, but why the young....it is just a shame and sad. may God bless our human race, because we are a lost and confused race.

Im gonna miss our talks man. You didn't deserve to go out this way but I know God had a purpose that we have yet to understand.

Delshon was a very respectful young man.... I seen him everyday and each time I saw him he always beared that lovely smile. He will be greatly missed and I send my condolences to his entire family.

This is so sad. I send my condolences to the family of this young man.