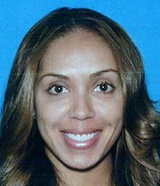 Stephanie Elyse Moseley, a 30-year-old black woman, was shot and killed Monday, Dec. 8, in the 300 block of Hauser Boulevard in Fairfax, according to the Los Angeles County coroner’s office.

About 7:30 a.m., officers responded to calls that shots had been fired and that a woman was screaming in an apartment. When officers arrived at the Park La Brea apartment complex, they heard more gunshots.

SWAT officers also responded because of a barricaded suspect and found two people suffering from gunshot wounds, according to a news release from the Los Angeles Police department.

Both were pronounced dead at the scene.

Moseley was a dancer and a reality-TV personality on the VH1 cheerleader show “Hit the Floor.” Hayes was a rapper.

Burrell Wilks, who said he was Hayes’ best friend, was outside the complex the day of the shooting. Friends of the couple are reeling from the loss, he told KTLA.

“No one seen this coming – because, again, Hayes is not a violent guy,” Wilks said. “We’re all devastated. We’re at a loss for words on this one.”

Anyone with information is asked to call West Bureau Homicide Dets. Scott Masterson or Rolondo Rodriguez at (213) 382-9470. Those who wish to remain anonymous can call Crime Stoppers at (800) 222-8477.

Do you have information to share about the life of Stephanie Elyse Moseley ? The Homicide Report needs your help. Please fill out this form or e-mail us at homicidereport@latimes.com.

Share a memory or thought about Stephanie Elyse Moseley

Damn, the one black couple at Park La Brea and this happens. Sad.