Eric Atkinson, a 31-year old black man from Los Angeles, faces capital murder and other charges in connection with the killing of a mother of five, authorities said Friday.

Atkinson, 31, is a “reputed gang member,” according to the Los Angeles County district attorney’s office. He also has a history of theft and narcotics-related crimes.

He is scheduled to be arraigned  Tuesday. 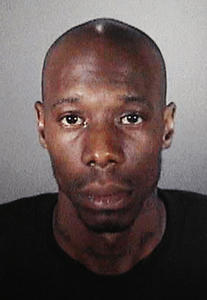 Martha Sanchez, a 39-year old Latina, was working alone at the Happy Bargain discount store Sept. 17 when police allege Atkinson entered about 8:50 p.m., robbed the store of between $200 and $300, and shot Sanchez multiple times.

The store, in the 7400 block of South Broadway, is just two blocks from the Los Angeles Police Department’s 77th Street Station.

A customer found Sanchez within 10 minutes and called for help, but she was pronounced dead at a hospital at 9:40 p.m.

LAPD Det. Chris Barling said Atkinson had lived in the area for a "lengthy period of time.”

Atkinson was connected to the shooting using video surveillance footage and information from more than 10 tips from the public. Atkinson was arrested Oct. 9 on a parole violation.

LAPD Lt. Jeff Nolte said Sanchez’s connection to the community had spurred the public to help. She was remembered as kind and helpful.

"She's been at that market for a while," Nolte said.

Sanchez had been working at the market to pay for her eldest daughter, Gabriela,  to attend Fresno State University, where she had recently been accepted.

"Now that's been put on hold because of this coward," Nolte said, referring to Atkinson.

Gabriela Sanchez now plans to attend Pasadena City College. When she was told an arrest had been made in her mother’s case she said she felt relief "and sadness that, unfortunately, it's not a bad dream."

That's a damn shame! He just walked in there and killed that woman! That's jacked up, he had the money, why smoke her like that?

Wow in shock and sadden by his actions. As a youth about 17 years ago. I made a few mistakes and ended up doing a camp program at CMYC camp smith with Eric. I remember us studying together to pass our GED test. His goal was to go to a fire camp and gain some training and take it from there. He was a leader and worked his way up to C/o. I would always think and wonder where he was and if he had made it. Sad what drugs do to people. prayers go to the family that he hurt and has made suffer . I am glad I was given the chance to change and have done so. May God have mercy on his lost soul even if he did not for his victim.

I say a public execution is more fitting I'll be on firing squad too.

So Happy for this family!!, they deserve justice for their Mother!. And, this guy is such a coward to kill an unarmed woman for no reason!.

Hope he rots in prison the rest of his life. The state should cut him off from his family and loved ones forever,. No letters , calls, or anything allowed ever again. He took that from this family, so why allow these cowards that privilege when they're in prison?