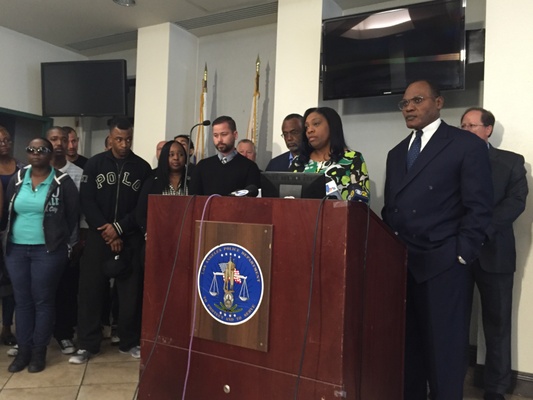 Lenell Ellis was in bed about to go to sleep on Thursday night when she got the call she had been praying for.

“We got him,” the LAPD detective said. A suspect in her son’s slaying was in custody.

Tyrone Foster, a 22-year-old black man, was arrested on suspicion of murder at a hotel in Hawthorne on May 5, police said. Foster has been charged with one count of murder with gun and gang allegations, according to the Los Angeles County district attorney’s office. 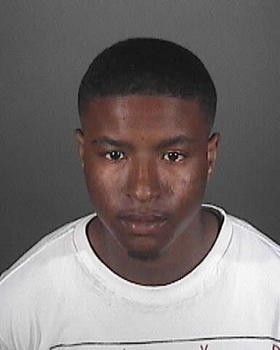 Foster is accused of running up to a strip mall in the 5500 block of South Vermont Avenue about 2 p.m. on March 25 and firing at least six shots into a group of people, which included a toddler, then fleeing.

Lenell Ellis’ son, Robert Ellis, 27, had just stepped outside a barber shop and was waiting to get his hair cut when the bullets came flying, striking him in the chest, police said.

Ellis, who is not a gang member, was taken to a hospital where he was pronounced dead.

Last month, police announced a $50,000 reward for information in the case and publicized surveillance footage showing a man in a gray hooded sweatshirt running up and opening fire. A separate video showed frightened shoppers running and taking cover.

Police believe help from the community got them closer to the suspect, who they said may have opened fire because he thought rival gang members were in the group.

“We did receive numerous tips of who the suspect may be,” LAPD Det. Chris Barling told reporters at a news conference Monday.

Lenell Ellis attended the news conference, flanked by family and friends. Her eyes welled with tears as police spoke.

“We have to stand up to people who are doing things that are not right,” she said.

Friends and family described Robert Ellis as a “good guy,” one who made those around him laugh. He was looking for a job and hoped to one day start a clothing line or obtain his barber’s license.

Lenell Ellis said her son’s death has affected many people including friends, family and her son’s girlfriend, who was expecting a child with Robert Ellis but miscarried.

“People don’t realize what their foolish actions do to people,” Lenell Ellis said.

Each night, Lenell Ellis said, she has prayed for the man who killed her son to be caught.

She’s distributed more than 800 fliers and made a point to call detectives at least twice a week. She wanted police to know that Robert Ellis mattered, that his life mattered.

When she got the call from Det. Eric Crosson on Thursday, she felt as though people cared enough to speak up.

“My son one day will get justice,” she said.

Photo, above: Lenell Ellis speaks to the media at a news conference announcing an arrest in her son's killing. Credit: Nicole Santa Cruz, Los Angeles Times

My condolences goes out to the loved ones of the victim, this was an act of senselessness and im saddened by it..the devil is working but GOD is able and will defeat him and his demonic followers... I didnt know you but rest easy baby boy..justice will be served and your loved ones will have closure by the grace of GOD!