The night was filled with stories of loss and grief, meant to bring awareness to issues plaguing some Los Angeles communities.  An LAPD officer talked about the 2009 killing of his son. A woman spoke of the fatal shooting of her sister-in-law.

At a town hall organized by Californians for Safety and Justice, a nonprofit dedicated to improving the criminal justice system, a one-man, three-woman panel shared stories of violence and how to cope with the unwanted label of being a survivor of crime. The event was held in an auditorium at LAPD headquarters downtown. 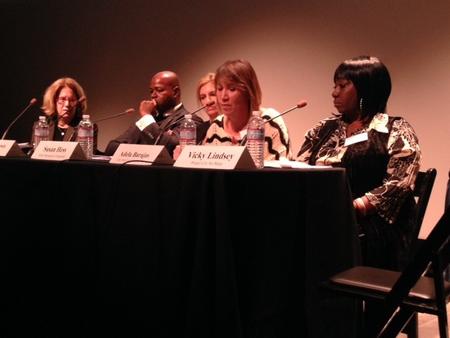 Aqeela Sherrills, a victims outreach strategist for the organization, said that when his son, Terrell Sherrills, 18, was killed in 2004, it “shifted something in me.”

“Not so much of who killed Terrell,” he said. “But what’s killing our children."

City Attorney Mike Feuer posed a question to the audience: “How many of you have had your lives touched by gun violence?”

About half of the dozens or so in attendance raised their hands.“This is not right,” he said. “We can do better than this.”

The event also highlighted a report conducted by the nonprofit about the views of crime victims in the state. Here are some of the key findings:

Two in three crime victims report experiencing anxiety, stress and difficulty with relationships, sleep or work. Half felt that it took more than six months to recover from those issues.

One in five Californians acknowledges having been a victim of crime in the last five years. Half of those said they were a victim of violent crime.

Victims of violent crimes are more likely to be low-income, young, and Latino or black.

Community activists also spoke of their motivations for starting their groups. Adela Barajas, who runs Life After Uncivil Ruthless Acts, urged others to get involved.

“Come to our meetings and learn that we are just people with a lot of trauma in our lives,” said Barajas, whose sister-in-law, Laura Sanchez, was killed at the age of 34 in front of her teenage son. Sanchez was a mother of five.

Vicky Lindsey, the founder of Project Cry No More, talked about the effect that her son’s death has had on her family.

Lionel Whiteside, 19, was shot and killed after a high school football game in Compton on Nov. 9, 1995 -- the same day as he father's 66th birthday. Whiteside left behind a child with a mother who couldn't function, Lindsey said. But that wasn't the beginning of the violence Lindsey has experienced. In 1989, her son's father was also killed.

“Imagine that,” she said.

Near the end of the night, Barajas asked the audience to hold their hands out in front of them.

“That tension in your shoulders,” she said. “That’s how we feel living in a community with homicide.”