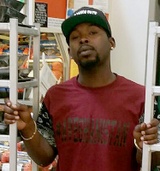 Travione “Tray” Rashad Mason, a 26-year-old black man, was shot and killed Saturday, July 11, in the 11100 block of South Berendo Avenue in Westmont, according to Los Angeles County coroner’s records.

When deputies arrived about 11 p.m., they discovered three men had been shot. One of the injured, a 55-year-old man, was hosting a birthday party at his house, Jauch said. He was grazed by a bullet and refused treatment.

Mason, an employee of the catering company working at the party, was shot in the upper body and pronounced dead at the scene at 11:09 p.m., according to coroner’s records.

Another employee of the catering company was shot in the hand and taken to a nearby hospital, where he was treated and released, Jauch said.

The men were shot while they were in the backyard, Jauch said, but investigators don’t have a description of the shooter.

“We do not believe the suspect was a partygoer,” Jauch said, “but he opened fire at a large party and unfortunately three people were shot. We don’t know the reason or motivation. We assume it’s a male, because most of our suspects are men, but even that is unverified.”

Keith Garrett, owner of the allflavornogrease taco stand and catering business in Watts, said Mason had been working for him about four months as a sous chef, preparing their pico de gallo and other fresh ingredients.

“The only thing I can say about Tray is that he loved to cook and take care of his kids,” Garrett said.

“I’ve known him since he was 6. We lost touch for a few years, but he came to me earlier this year and said, ‘I’m ready to change my life.’ He had two kids, with another on the way, and he was very family oriented. He said, ‘I believe in this all flavor, no grease movement and I want to help. Help me help my kids.’”

Garrett said Mason was helping him save up to buy a taco truck so they could expand the business.

“He was a very loving and helping young man. All he wanted to do was help, help, help," Garrett said. "He wanted to make things better and make people smile. He didn’t have any argument with nobody. ... He was just in the wrong place at the wrong time.”

Anyone with information about the shooting is encouraged to contact the sheriff’s Homicide Bureau at (323) 890-5500. Those who wish to remain anonymous should call Crime Stoppers at (800) 222-8477.

Share a memory or thought about Travione Rashad Mason

Your cousin Ray just found out and told me and my heart dropped and filled with pain I've watched you, Ray,Tricey, and Trudy grow up and I am lost for words!!!! My prayers are with your dad Pedro and your granny Mattie B!!!!! Last time I talked to you you was in a good place and loving those babies!!! May your soul Rest In Paradise.... I will always love you Tra😢😢😢

Yeah right....BLACK LIVES MATTER, Than why do we keep killing our own...Somewhere along something is just a joke.

Im from Australia and came across this article.
Im so sorry for you loss and my heart goes out to all his family.
From what I read he was an amazing guy, that didn't deserve his life to be taken away.
We don't have these kind of things happening over here, I only see it in movies so to see this picture of reality is heartbreaking.
I hope they find the cowards !!!
God bless x

Think he was spook from Atlantic drive compton crips..

What gang was he from? To be killed in the back yard like that he obviously ran into one of his rivals, that area is pimp town gangster crip it was formerly 112 hoovers but they had to much pressure from rival gangs and lost a lot of members to prison so the remaining evolved into 92,94,107 hoovers and there old neighborhood was taken over by south los and a bunch of ecc members and other members living in the area formed pimp town gangster crips.. But it could be anybody also heard a gang called 112 gangster crips have been trying to start a gang.. U have Denver lane bloods across imperial also.. That area is super dangerous right now.. Since the death of KP aka Kenny a week ago.. It had been WAR

This was my mother's baby boy & my baby bother. I can't express my feelings on how I feel. I love you to death Travione a.k.a "Spook". I'll never be the same again, I just can't picture life without you and I still can't wrap my head around this. I can say this, I will take care of his kids for sure. Your big brother "Ambussh".

The word "Loc" in "Ambussh Loc" is a reference to being a Crip.

Can someone decipher what "ambush loc" said?

This was my mamas baby boy ma baby bother i can't express my feelings on how I feel love u till death travione aka spook 3 I never be tha same again I just can't picture life without u and I still can't wrap ma head around this , I can say this I got his seeds fa show yo big bro Ambussh

Tray is the father of my sister daughter, and unborn child. My heart goes out to his family. All these senseless killing just destroy families. There's a mother, and father without their son. Siblings without a brother. And 3 children without their father because of a senseless murder.

Love you bro. Rest well. I'm sorry this had to happen to you

I believe that Tray was brought back into our life for a time and season. It's very difficult to understand why things happen the way they do ... Im so happy how my
son Keith made a difference in Tray's life in a positive way. I will always remember Tray's words at the end of their work day...he would
say, "Ms. Carolynn, I dont get tired"
😄

Tray was my stepson...I been in his life the last 15-20 years. That was my babe boy .I watched him grow from a boy to a man.. SORRY PEDRO And MATTIE.. so sorry..love y'all...We had a good time on the trip to lv.. Tray ..Talli and Kaza send they love..we willll miss u Tray..