'Never in a million years': Family stunned by shooting of 22-year-old in Compton 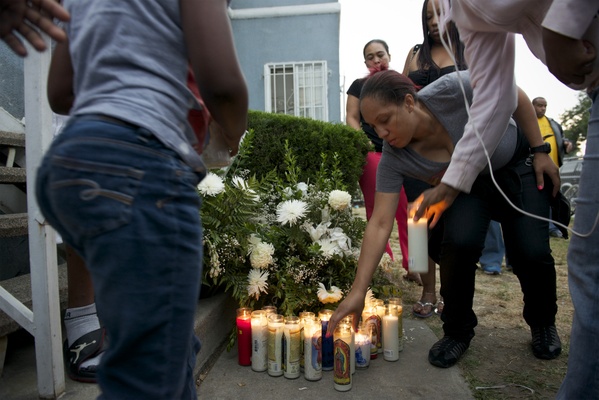 Dre’sean Harris moaned on the cold sidewalk beside the stairs. A red patch of blood was beginning to form on his side. People rushed to help.

On Tuesday about 10 a.m., Harris, 22, was standing in the courtyard of a light blue duplex talking to a 16-year-old when two men opened fire, killing Harris and wounding two others.

The gunmen’s identities remain unknown, but witnesses in the area told The Times that Harris was not the intended target.

Los Angeles County Sheriff’s Department Det. Dan Morris said Friday that it’s unknown who the target might have been.

In Compton, people are about four times as likely to be a victims of homicide compared with Los Angeles County residents outside the city of about 100,000. Last year, 28 people were killed in Compton, 64% of whom were black.

A day after the shooting, family and friends gathered in the same courtyard in the 400 block of East Palmer Street to remember the man they said “was harmless.” Others were there to denounce street violence. Some talked about needing to change the perception of witnesses as “snitches.”

“These incidents don’t start without someone knowing,” said LaWanda Hawkins, who runs Justice for Murdered Children, a nonprofit group that helps families of homicide victims.

Harris could usually be spotted with his skateboard. He liked taking electronics apart and putting them back together, and if someone got a virus on their computer, he could be relied on to clean it off. He was also a fan of video games and anime, and those who knew him described his humor as corny.

“Never in a million years would I expect something to happen to him,” said La’Terra Veal, his aunt’s fiance. Veal said Harris was always helping out around the house and his help was needed -- his aunt has health problems and her mobility is limited. 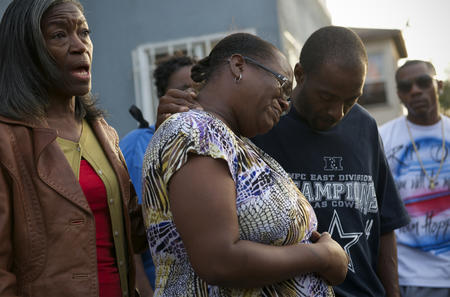 On the Fourth of July, Harris celebrated his 22nd birthday with his girlfriend, Sarabi Williams, who cooked him a lunch of pork chops and broccoli. The two went to Long Beach to watch fireworks. They often spent their time watching movies or going out to eat.

Harris was working part time in warehouses while living with his aunts. He had a goal of going back to school and was saving up money to get an apartment with Williams.

Williams said the fact that Harris was killed is hard to understand.

“He was never involved with any type of gang-related stuff,” she said Friday.

At the vigil, Nakia Sims stood in the courtyard, her eyes filled with tears and frustrated by her son’s killing. She said she taught Harris to be sweet and respectful.

“I was looking forward to so much of him,” she said.

She wondered why the assailants didn’t have anything else to do that day.

Photos: (Top) Family and friends create a memorial with candles at a vigil for Dre’sean Harris, 22, who was shot and killed July 7 outside his aunt’s home in Compton. (Middle) Compton City Council member Emma Sharif (left), addresses the crowd at the vigil for Harris, son of Nakia Sims (center), and Michael Harris (right). Credit: Kelly Creedon, Los Angeles Times

“He was never involved with any type of gang-related stuff,” If you sit in a barber shop long enough, you will eventually get a hair cut. Same is true for an addict. No matter how long they have been clean, if they are always around their drug of choice they will eventually use again. Simply, you cannot raise children or live in and around gang activities and not expect for your kids or yourself to be not personally affected by it at some point. RIP

— Casper18 ; go take a look at the homicide map. Some area's of LA (and OC) go for years or decades without a homicide. Why is that?

As always, if you want to find the solution, you have to speak and listen to the truth.

first of all my condolences 2 the family of this young brother, may GOD hand 's comfort you n strnghen u .Yes it's tru that violence can n does srtike any x any where, i disagree with the perception that Compton's inhabitants r 2 blame or don't care. These few snakes n the grass, who 4 no other reason have no self value, nor the value of others killed this Brother. What upset's me the most is these same individuals could b me n your brother, cousin , etc n those around them know what they do n condone these evil acts .Until these aimless youngmen find God n repent, then u r me could b next.It some x has nothing 2 do with gangabnging , b cause this youngman did'nt bang.so b 4 you judge, ask yoursekf if "I" was standing there would it have mattered. R.I.P. Lil Bro, sorry 4 your loss.

I'm tired of stupid ppl like you syscom3...you never miss an opportunity to disrespect the families that are taking in the loss of a loved 1. This could happen anytime to anyone & everywhere. Mind your damn business!!!!!. I pray this family finds peace in their heart. I know it's hard, my son was murdered a year ago so I could relate to this.
CASPER 18

Why should anyone be surprised. Its Compton. Where violence is the norm and is acceptable.

These shootings don't happen in many area's because the people wouldn't tolerate it. Once the people of Compton change their attitudes, then the violence will end.