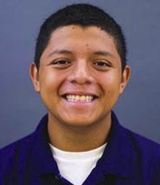 About 2:20 p.m. officers from the LAPD’s Foothill Division found the teenager on the sidewalk. Barrios had been shot in the head, police said in a statement.

In a motion for a $50,000 reward approved by the City Council, police said Barrios was shot after “a dispute with an unknown suspect or suspects.”

Willy is a type of friend and i knew that was nice and never let us down and i just hope he happy were he is right now and we had alot great times together when we sleepover at there house we use to like go outside like around 3:00 a.m. and we would chill on his house porch those days are gone now i can't believe it is the second birthday he has miss already and i am still devasted from that still😓😓😓

Willy Barrios, he's the kind of kid that everyone knows and loves he didn't have haters in the school but I'm not so sure about outside of the school. When I met willy was my freshmen at Cesar Chavez Learning Academy I was going to ASE , it was a new school I didn't know anyone of course but willy came up to me and said "hi, I'm willy what's your name?" I was scared to answer her but I still did I said my name and from then on we never stopped talking to each other he treated all the girls like If they were family to them if he didn't know you he comes up to you and gets to know you. He was a great guy.

We had p.e together my sophomore year that's when we got even more close. Every day we would mess round with each other and drop each other it was funny. One his last days at school he was telling me and best friend kathryn that he loved us ... Out of no where ... It was weird then on that Friday he hugged me and said you will always mean something you will do great in life , I love you sister.

Then that's when I saw the news ... We all were hurting. No one could look at each other with out tears... It's honestly the saddest day I have ever lived ... My best friend dying. That's something that I won't ever get over . I don't think anyone that ever knew him would get over it.