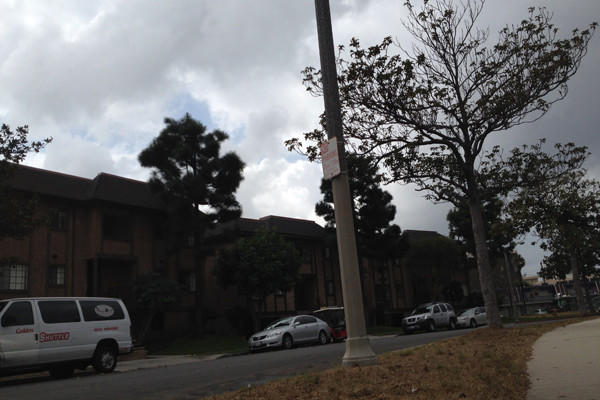 "That's where they found him lying," Jasmond White said as he pointed to a spot under a light pole across from his apartment in the 5400 block of West 99th Place in Westchester.

Early on Oct. 14, 2007, Devon Curry, 18, was fatally wounded in a shooting here. He died the same day at Harbor-UCLA Medical Center.

White heard the single gunshot around 4 a.m. He wasn't scared.

But the violence tends to happen in specific areas. White grew up in South L.A.’s Westmont neighborhood, where 83 of the 96 homicides since 2007 involved a gun. But about five miles west in Westchester, slayings are rare. Since 2007, there have been eight, seven of which were shootings. One of those — the only homicide in Westchester in 2007 — left Devon Curry dead.

Before the shooting, Curry was at a party with friends — members of an Inglewood gang, according to police. Curry’s group jumped two men who were walking to an apartment near the party, said Det. Luis Carranza of the LAPD West Bureau.

During the fight, one of the men who was attacked shot Curry.

Police found the man's cellphone where Curry collapsed. "It was no doubt Devon was the suspect in the robbery," Carranza said.

The shooter was arrested, but the L.A. County district attorney’s office deemed the shooting self defense and declined to file charges. The shooter was released and the case closed.

White said Curry's killing was the first homicide he knew of on 99th Place since he moved there in 2004. The street, steps from the bustle of Century Boulevard and Los Angeles International Airport, is lined with apartment buildings. On a recent afternoon, schoolchildren skipped along the sidewalk as White and his brother recalled the shooting. The roar of planes overhead drowned out the children’s giggles.

White smiled at a father and son who walked near a vacant lot enclosed by a metal fence. He playfully boxed with the boy, who hid shyly behind his dad.

They were a few feet from the light pole where Curry collapsed.

"It's more working people out here. There are no specific gangs," White said. "It's quiet."

I'm trying to understand how come our family wasn't notified when they caught the person who murdered our family member? We had no clue what happened!