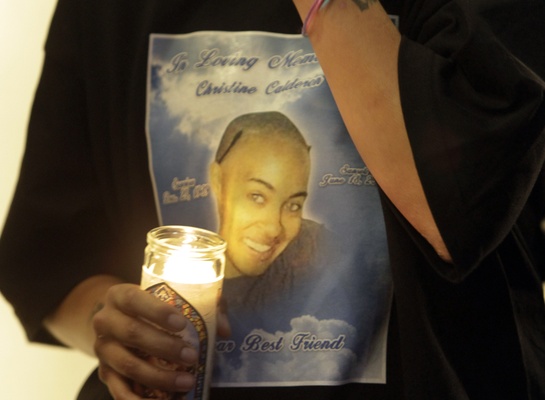 Robert Harden didn’t know his co-worker had been stabbed until they ran away from the fight on Hollywood Boulevard.

Christine Calderon, 23, pulled up her white shirt to reveal a wound. Blood covered her right side.

“It was really, really bad,” Harden said Wednesday, the first day of the trial of Dustin James Kinnear, 27, who faces one count of murder with the use of a knife in the June 2013 killing of Calderon.

Calderon's death prompted city officials to increase patrols in the tourist-packed area. In addition to Kinnear, two men were charged. Jason Joel Wolstone, 34, pleaded no contest in April to one count of assault. Brian Joseph Widdows, 35, also pleaded no contest to being an accessory after the fact. Both of the men were sentenced to two years in state prison.

On June 18, 2013, Harden and Calderon met up about 1 p.m. They had a margarita and went to the Grove shopping center. Later, they made their way to Hollywood. Their goal that Tuesday was simply to “have a good time,” Harden said.

The two were walking along Hollywood Boulevard about 8 p.m., when, Harden said, he pointed out a funny sign.

The sign, held up by Widdows, had an expletive and asked for money, Harden said. Harden and Calderon took photos with their cellphones.

Widdows and Wolstone, who was nearby, then demanded cash, Harden testified. Kinnear, also nearby, also demanded money. Harden and Calderon replied with an expletive, and a fight broke out, Harden said.

Wolstone, a Michigan native who was couch-surfing at the time of the incident, denied asking for money. He testified that Kinnear, also known as "Red," had come out from an alcove and had gotten “nose-to-nose pretty much” with Calderon.

Wolstone said he was tackled from behind by Calderon and then put her in a headlock. When Widdows told him that Calderon was a woman, Wolstone said he released her and noticed blood on his arm.

After the fight, Calderon was taken to a hospital, where she was pronounced dead.

Wolstone and Widdows, meanwhile, went to McDonald’s, where they saw Kinnear, who said, “I stuck somebody,” Wolstone testified.

Wolstone and Widdows then returned to the scene of the stabbing and were arrested.

Tracy Breeding, an acquaintance of Kinnear, also saw Kinnear at the McDonald's.

Young said there was blood on Wolstone and Widdows, but not on Kinnear, raising doubts about his responsibility for the stabbing.

Prosecutor Ian Phan assured jurors the trial would move quickly. “The case is not complicated," he said.

Correction: A previous version of this story said that Widdows had pleaded not guilty to two counts of accessory after the fact. Widdows changed his plea to no contest and was sentenced to two years in state prison.

It is sad to think that people lose their senses about the beauty of life. There are no winners in this case. The life of a young woman is lost because someone could not walk away. They decided to take a stand against ignorance. In the Proverbs it clearly states, the power of life or death is in the tongue. While in prison, those responsible for this act of evil, will learn the error of their ways.

Man this story is a trip. Stories like this make me glad that I ignore homeless people and transient people out here in LA.

Because of the situations they (homeless and transients) are in and that they feel like no one cares about them and such, they'll take their frustrations out on you and unfortunately Mister Calderon found this out the hard way.

Los Angeles is full of people who have ben disrespected by life and other humans and they take frustrations out on perfect strangers.

You never know that one homeless/transient person you may give some change or a dollar to one day, may ask you for change again some day or months later and if you refuse to give them anything they may fight or kill your behind because they don't have anything to lose.

I aint no better than anybody and I used to live in a lot of shelters when I was a kid and teenager, but I try my best to ignore and stay away from people who aint got no goals or ambition and who only think about money or their next drink. I aint with that.