Shortly before 7:30 p.m., officers from the Los Angeles Police Department found Perez on the sidewalk with a gunshot wound to the chest, according to a news release from the department.

Perez was pronounced dead at the scene at 7:34 p.m., according to coroner's records.

Police said that the gunman was walking south on South Alvarado Street when he passed Perez. The man stopped, turned around and shouted something at Perez.

The two began walking toward each other, and the other man pulled out a gun and shot Perez once in the chest before running south on South Alvarado Street, then east on West Olympic Boulevard. 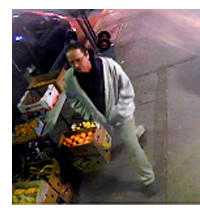 Police on March 9 released a photo of the suspect taken from surveillance video. …