An ornament and a memory: Families who lost loved ones trim a tree in annual LAPD event 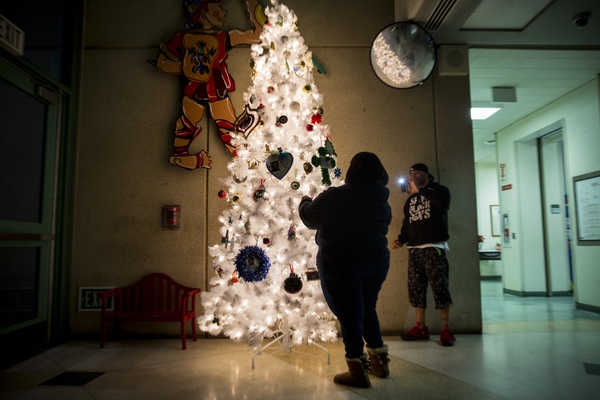 For 14 years, the Los Angeles Police Department’s 77th Street community station and the L.A. County Bureau of Victim Services have hosted an annual holiday tree trimming for people who have lost loved ones to violent crime.

Detectives and victims' advocate Angie Moreno stood in the lobby Tuesday evening as families adorned a Christmas tree with photos of their slain siblings, children and parents.

Some were struggling to endure their first holiday season without a family member. Others have learned over the years to cope.

And some people's thoughts lingered on the final holiday gift they received from their loved one.

Joe Randle said that he has a special place in his heart for his only biological son and that he cherishes their last Christmas together.

This Christmas will be Cleveland Ross III's first without his son, Cleveland Ross IV, who was killed March 12 in Vermont Vista. The father was working with his 27-year-old son on a car battery outside an AutoZone when a gunman drove up and fired the fatal shots.

Ross III plans to spend the holiday with his 5-month-old granddaughter, Myhonesty, whom his son never met.

Yolanda Williams is celebrating the holiday season for the seventh time without her son, Waymon Weston, who was killed Oct. 19, 2009, in Westmont. Sheriff's officials said the 20-year-old was outside his home when two men approached and opened fire.

She has loosened her grip on the painful memory with each passing holiday, but she can still remember the final Christmas she spent with her son, and the last Christmas gift he gave her: an embrace.

2014: LAPD station brings victims' loved ones together in holiday tradition

My lost didn't come from violance but my lost still remains with me to this day. My heart goes out to these indoviduals and to myself.

Thinking of you this Christmas
and how things just aren't the same.
There's this dull and nagging heartache
When someone speaks your name.
Sadly, we can't buy gifts for you
Just silent tears that fall.
For this time of year without you is the hardest time of all.