After son's death, a mother issues warnings to those who look like him

If Jessie Guidry-Acquah sees a man on the street who reminds her of her son, she issues a warning.

She tells the man about her own son, gunned down in Compton at the age of 23.

On that May morning, David Davon Matthewis woke up, ate some chicken and cereal for breakfast, played a quick video game, then showed off his bike – a black beach cruiser – to his mother. 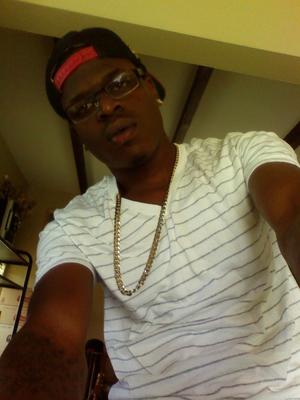 Matthewis left his video game on because he said he’d be right back.

Just after 11 a.m., Matthewis was walking home in the 1000 block of East Elm Street in Compton when a vehicle pulled up and someone inside shot at him, said Sgt. Robert Gray with the Los Angeles County Sheriff’s Department Homicide Bureau.

Gray said he thinks the people involved are gang members and may have mistaken Matthewis for a member of a rival gang. He said he has two suspects in mind but needs more evidence before the Los Angeles County district attorney's office will file charges.

Hours after the shooting, Guidry-Acquah found herself at St. Francis Medical Center, in front of a physician who bowed his head low before delivering the news: The bullet had hit her son’s spine and a main artery before exiting through his lower abdomen. The doctor said there was nothing more they could do.

“I hope his life wasn’t taken because of mistaken identity, someone thinking he was from a set of gangs and he wasn’t,” she said.

In recent years, her son had shown an increasing interest in making music, said Guidry-Acquah.  He bought a guitar and a microphone and would spend hours in a storage room writing songs.  After he died, his relatives discovered more than 100 songs Matthewis had recorded.

“I didn’t even know the boy had did that much,” Guidry-Acquah said.

Recently, Guidry-Acquah saw a man who looked like her son at a Blue Line station.

She approached him and his friends, who were playing a dice game.

The boys were quiet at they listened to her story.

She told them to dress differently, to be careful of their colors. She said there are evil people in the world, shooting others for no reason.

It has been almost a year since the murder of my brother please if you know anything contact the Detectives that are working so diligently on this case. I love you forever David.

I cannot understand why you would think that the two stories are anything alike and that they would both feel the need for the attention that one got. Why would you think these two stories should get the same attention? Now don't go get all defensive on me...I am only asking you a question.

Amazing how the local media spent hours reporting on the Trayvon martin incident that was on the other side of this continent, yet wont devote anything more than a short article over these types of killings.

Thank you to whoever posted DEC 15 posting. God bless

All this mistaken identity is false : he was killed because he wouldn't change his bike color which was blue in a piru neighborhood. He wasnt a gangster, I knew something was wrong because for a month straight he was looking to buy a gun because he was threated multiple times by someone from elm st. idk who did this but I can assure you his girlfriend does..she lived/s around the corner from him and where it happened she should know

So sorry to see that another young brotha is lost to stupid gang violence. My heartfelt condolences to his family.

A question that I have is about this article. The headline reads, "After son's death, a mother issues warnings to those who look like him." I read the article all the to the end. When the mother approached the man that looked like her son (and his friends) at the blue line train station, she advised him and his friends to "dress differently, to be careful of their colors."

So my question is this: What was her son wearing when he was killed? Was it all blue or all red? Was it merely sagging pants? What were the men at the blue line station wearing that compelled this grieving mother to warn these young men about their appearance?

The writer of this article, Nicole Santa Cruz, really missed an opportunity to educate their readers and she especially missed the mark of good journalism by writing this article about a victim's death being affected by his dress but not addressing specifically what the "dress code" it talked about in the article actually was.

hey David its me Jess, I love you so much and I am glad that your memory is still carrying on and people are trying there hardest to bring your killers to justice. like Lydia said, we wont stop Bro until you have justice. xoxoxoxo

The mother is right, those living in gnage infested areas do not need to dress or look like gang-bangers. I am sad for the mother's loss...

It's not too late to speak up if you know anything about the murder of my brother please contact the police. We will not stop until the person who murdered my brother is caught. Turn yourself in please.

My deepest condolence to the mother and those effected with this lost. As a resident of Compton, this year I have not felt as safe as other years. I have heard a couple of gun shots, have seen more folks digging in my trash cans in the middle of the night, and a lot of graffiti in the walls and on the sidewalk. How about a gang injunction and a zero tolerance in downtown Compton? How about enforcing the small crime that happens but it does not seems it is a big priority that somethings leads to a bigger problem/crime? Lets make Compton a more beautiful and safer city. We do not need to loose any more young folks or anyone to gang violence. Compton residents are we up to the challenge to be more a part of the solution than the problem? How many of us voted in the last school elections? How many of us have gone to at least one city council meeting? How many report any suspicious activity to the Sheriff? How many of us talk to our neighbors or are a good neighbor by respecting others? It is up to us to make Compton the city we all want and the city it once was and it will become. Take pride in Compton and get involved in making this a better Compton. You wear a Compton hat or sweater but you throw trash in the street or maybe you are the one that commit graffiti. Really? You really represent Compton. Anyways, just sad and heartbreaking to read about a mother loosing its child.

Thank you to all of you who are working so hard on my brother's case. We are never going to give up until justice is served FOR VENGEANCE IS MIND SAYETH THE LORD. THANK YOU AGAIN. I LOVE YOU FOREVER MY DEAREST BROTHER DAVID.

I agree with this mom's advice, appearance is everything don't matter what race you are, gangs are a different breed these days if you look a certain way they'll assume your a rival gang member and pop you, it's not like before when@least they would ask what gang you claim, a few times I was asked what gang I was from made me rethink the way I dressed back in my high school days, I wasn't a gang member, but I did like wearing bagging clothes, now when I run into gang members in the area they never look my way or ask what gang I claim, why, because I changed my appearance, it goes a long way, I warn people don't try to look like these foo's on the streets it can get you killed.