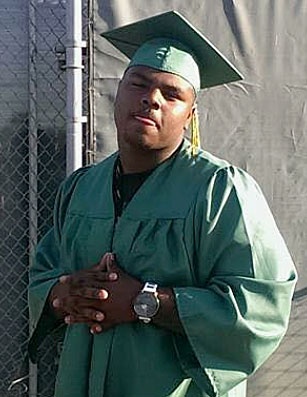 Anthony King pleaded not guilty to one count of murder, with allegations that he used a gun to commit the crime and acted to benefit a gang, said Jane Robison, a spokeswoman for the Los Angeles County district attorney's office.

Bender and a friend had left a store around 9 a.m. when an assailant ran up behind them and "basically executed Mr. Bender," said L.A. County Sheriff's Det. Eduardo Aguirre. Bender's friend was uninjured.

Bender was taken to a hospital, where he died 13 days later, nine days shy of his 20th birthday.

King is affiliated with the Atlantic Drive Crips, and Bender was involved with the rival Neighborhood Compton Crips, Aguirre said. Investigators believe the two men had fought in the last year, he said, and that King was retaliating.

"Their two neighborhoods basically butt up to each other," Aguirre said. "These gangs have been feuding for at least 20 years."

But Bender's mother, Tiffany Moore, said her son "fought the fight" to stay out of gang life. She thinks his father's past gang involvements came back to haunt their son. "He used to be a bad actor. He isn't any more. He's working, trying to do good. He doesn't want to go back to jail, but it's like a constant battle."

Their son, Andrew, was born and raised in Compton, she said, "and I would be lying to say he wasn't part of that clique. But he wasn't the type who stood on the corner with his pants hanging down, doing nothing. He was busy doing things all the time. He was playing football. He was going to school. He had a job."

Moore said she moved her family out of Compton when Bender was in 10th grade, because he wanted to get away from the violence. "He couldn't even get off the bus coming home from football practice," she said, without being harassed by gang members. 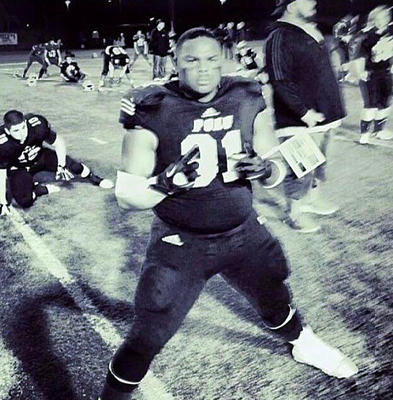 Bender started playing sports when he was 5, Moore said, and when he discovered football he never looked back, sometimes playing in two leagues at once.

His goal was to become a professional athlete, Moore said, so they moved to an area where he could enroll at Long Beach Poly, which has one of the top football programs in the state. He joined the junior varsity team as a fullback in 2012,  but Moore said he developed back problems in 2013, his senior year, and could no longer play.

After graduating in 2014, he attended Long Beach City College but stopped because he needed to work, she said. He got a job as a security guard and was making enough money to help support his two little sisters and prepare for the baby he and his girlfriend, Cyana Stephens, are expecting in June.

Stephens and Bender met in high school, when they were sophomores. She was dating someone else then, but she says Bender told her, "Someday you're going to be my girlfriend, and we'll have a family." They became friends, she said, eventually began dating and had been together since.

"He was my best friend," she said. "He was loving and funny. If you were down, he'd just do something goofy to bring you up. He was also very loyal.... That's why he had so many friends. His vibe was very special."

Bender had been staying with his mother recently, Stephens said, but the plan was for her to pick him up Jan. 27, and take him back for good to the rental they shared.

"He called me the night before. He was with his friends, and he asked if I would come get him that night, but I had been working all day, and I was just too tired," she said. "I woke up with a bad feeling and tried calling him the next morning, but he didn't answer his phone. Then his mom called and said, 'Andrew got shot,' and I was shocked."

Moore says she tried to keep her son away from Compton, but the week he died, Bender had a couple of days off work, and he wanted to visit his friends.

"He'd been going to work at 7 at night and getting off at 4 in the morning," Moore said. "I said, 'Andrew, you're working and doing good,' but he said, 'Mama, let me be a man.' He wanted to spread his wings, but he never made it back home."

King is being held in lieu of $2.4 million bail. He is scheduled for a preliminary hearing on June 7 in Department J of Los Angeles County Superior Court in Norwalk.