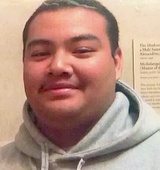 A man reported around 2 a.m. that his watch had been stolen by three Latinos in their 30s, one with a gun tucked in his waistband, on North Mednik Avenue near the Nueva Maravilla Housing Community.

Deputies tried to detain Vargas while searching for the robbery suspects in the 504-unit housing complex, according to Lt. Derrick Alfred. Vargas ran and hid from deputies, ignored their orders and resisted their attempts to handcuff him before he pulled a gun from his waistband, Alfred said.

“They engage in a violent struggle, and when [the deputies] are reaching around to get hold of his hands, one feels a gun in his waistband,” Alfred said. “He [Vargas] is actually dragging them around, trying to crawl away from them, and he breaks free of their grasp because he’s kind of sweaty. When he starts to get up, they see he has the gun in his hand, and fearing he is going to shoot them, they open fire.”

Each deputy fired eight shots, Alfred said. Vargas had 14 bullet wounds, he said, but investigators still don’t know how many were entry or exit wounds. Vargas was facing one deputy and had his back to the other, Alfred said, “so he had wounds on various parts of his body.”

Vargas was pronounced dead at the scene at 2:22 a.m., according to coroner’s records. Investigators put a security hold on the autopsy results on Aug. 16, meaning the coroner cannot make the information public until the investigation is completed.

Investigators found a loaded, semi-automatic .22-caliber pistol underneath Vargas’ body. The gun had not been fired.

The man who reported the robbery told investigators he saw one of the three robbers pass a handgun to his companion as they approached. He said the companion tucked the gun in his waistband and did all the talking while the other two stood by, Alfred said.

After being robbed, the man ran away and called his girlfriend to pick him up, and she called 911 to report that her boyfriend had been robbed at gunpoint.

As the couple drove along North Mednik Avenue, the man spotted his robbers with a group of people in a grassy area of the housing project across from East Hammel Street, Alfred said.

“He and his girlfriend park there to wait for the deputies so they could watch the group,” Alfred said, “but when the deputies drive up, the group takes off running eastbound into the housing complex.”

The deputies were unable to find the thieves, Alfred said, and investigators now think Vargas was not involved in the robbery.

The night of the shooting, family members told KTLA-TV Channel 5 that Vargas was not someone who would be involved in criminal activity. His mother, Lisa, said Vargas was a loving man who led Bible study groups and worked for a church warehouse.

“He will not go down as this criminal out on the streets,” she told KTLA hours after learning of her son’s death. “I’m going to do everything in my power to find justice for my son.”

The family has started an online fundraiser to help with expenses, according to the site.

Vargas “was a happy and hard working young man, an amazing fisherman and great BBQ’er,” family members wrote on the fundraising site. “He leaves behind a grandmother, mother, father, sister, brothers, nieces, nephews and host of friends. We ALL miss him terribly. He was really the rock of the family besides our abuela.”

Anyone with information about the robbery or Vargas’ shooting are asked to call the sheriff’s Homicide Bureau at (323) 890-5500. Those wishing to remain anonymous should call Crime Stoppers at (800) 222-8477.

Share a memory or thought about Anthony Daniel Vargas

Today the two deputies who killed you got denied qualified immunity. This is a victory and a step forward in obtaining a small measure of accountability. We ain’t done. We will never be done. You are missed Tony. I love you, I miss you. Keep looking over us.

Rest In Paradise Anthony, you are missed.

You will always be remembered

Im so sorry for the vargas familia their loss, i had a brother killed in the maravilla projects in 1989 due to gang violence we as family still feel the loss but we know hes in a better place and so is anthony daniel vargas...