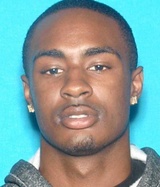 Riley, along with Trayvon Noel Jackson, 16, was standing in front of an apartment complex about 4 p.m. when a light-colored, four-door sedan pulled up and at least one person began shooting, said LAPD Det. Supervisor Chris Barling.

“There were two shots, then about 20 consecutive shots after that,” one woman said.

A third person was critically injured.

Share a memory or thought about Antonio Lee Riley

Like the wild,wild west. gotta be quick little bro.

What a waste of life. 18 years old! Gone forever

the war is over..the 60s have not retaliated after the two deaths of there fallen soldiers.. the rollin 40s and 60s are allies.. the 60s have been vicious for years but the 40s have been a recking crew last few years...a force to be reckoned with.. on the darkside area near 43rd and vermont corridor known as dark side rollin 40s

Man this is crazy but this fued started off of one reputable from 40's over a fight and Got killed and that's when the beef started between these two gangs. It's crazy cause the 40's know where 60's family member stay and spots vice versa so this war is making it easy for them to know where abouts. I don't know when this will end

@it's real,
Why do you say friends knocking off friends? You these guys all knew eachother? Bad drug sales? Jealousy? Women?

Sounds like friends knocking off friends, its a very common trend these days, sometimes your friends are worst than your enemies they'll get you when you least expect it.

@mortician @donnie ells @ chesterfield. Please help us to understand what has happened over the summer in our little neighborhood. We are brothers, uncles, fathers, children, neighbors, cousins, aunts, grandparents, and neighbors with no gang understanding or affiliation so we don't know the language or anything, but we do know that from June through August there have been lots of murders within these few blocks. Please help us understand why we have lost these men. By your comments you have knowledge of what is going on in our neighborhood. Please shed the light. Maybe you can help us by letting us in so that we can raise this next generation to avoid what is going on or what went down over here. A wise man told me before that some of the best examples to learn from are the worst examples. Help us please. What happened here between June-August and is it still going on? Thank you in advance.

I am so sorry to hear about the death of Antonio Riley my heart goes out to the mother. I know just how she feel because my son was kill. That is a pain that no mother should have to feel. I will continue to keep Antonio Riley mother and family in my prayer. You pray and you hope and watch that baby grow up and hoping that one day your child will be the man you pray for you never in your wildest dream think that your child will be gun down and left for dead a mother night mare. Nobody unless they have been through something like this could ever understand that pain because that is and unbearable pain to have because you live to see your child die a mother night mare this should never be I will say this God will have the last laugh so who ever did this might think that they are going down easy street you are not and i would like to say who ever you are you have no spine you put a mother through something that no parent should have to face. Do you sleep at night WOW.

Something has got to happen to end ths feud. This can potentially ruin the NH card. Yall need to work something out can't keep going back and forth. Too many lives will be lost, it ain't even worth all that. Dudes from Six 0 got family from 40's and vice versa, how yall gonna be out here chippin each other?? Squash this yall it ain't worth it!! Stop SHOOTING EACH OTHER!!

God allows this happen because there is sin in the world. It is up to us to choose how to live. Yes innocent people die because of the sin nature of our society. When you choose to represent a gang, tag up your neighborhood with ridiculous cryptic messages, and have a facebook page that depicts your set then yes you invite tragedy in your life. God gives us all free will and what does some of the young culture choose? To honor their gang by killing each other for a color. Honor Gods commandments....when you die in your sin you do not get a free trip to paradise, no you are not in a better place. You are not at peace. You go to a place of torment until the day of judgement...yes God will judge you and His wrath is nothing to play with. Get your lives right young people, your blood is spilling in the streets and for what? So you are a crip, but when you get shot in the street like a wild animal we see BLOOD! Grow up and get some counseling, go to a bible based church that is going to minister to you the right way and tell you the truth. You will reap what you sow. For the wages us sin is DEATH!

Did the victim shoot first, because they said there were 2 shots first pause, then 20 shots after that.

So many people have been murdered in that area this summer. Is this gang vs gang or are these turkeys having internal beef? Just too many in that area. Can anyone shed any light on what is going on over there? I don't understand gang stuff. Are they going after specific turkeys or random people or random turkeys in a the gang? I know someone can shed some light and explain to the rest of us about what is happening in our hyde park neighborhood. Thank you in advance.

Too many funerals and not enough graduations..too many youngsters dying before they can legally drink

We are losing too many young people.

Banning high capacity magazines in Caliornia hasn't stopped the violence, a 10 round magazine or 20 round magazine didn't make a difference here the victim still died, Los Angeles county should allow their citizens to get their CCW, I bet if law abiding citizens start to shoot back in self defense less kids like the victim would be dead.

victim off the NEW rollin 60's vs rollin 40's beef. The city is really changing dramatically.