Authorities have released the autopsy of Ezell Ford Jr. who was killed by police in South Los Angeles this summer. The release of the autopsy comes more than four months after Ford, a 25-year old black man with a history of mental health problems, was fatally wounded. 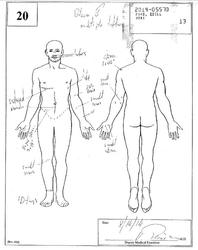 The gunshot wound on his back showed the surrounding skin had a "muzzle imprint," according to the autopsy, suggesting that shot was made at very close range. The autopsy said the back and side gunshot wounds were fatal. The autopsy does not make any judgment about the conduct of the officers in the shooting or provide a detailed narrative of what occurred.

Read more: Unarmed black man Ezell Ford shot in back, side and arm by LAPD

Leave it to the Observer to observe and assume Marijuana would cause anyone to act in any crazy manor. Shot in the back point blank like if the other two rounds werent enough. The PD is just hiring trigger happy basterds! Why cant they just admit it

marijuana does not make u violent it usually soothes ppl w mental illness.

So he tested positive for marijuana. He was high. Maybe that amplified his mental condition and caused him to behave erratic.

Shot in the back? Sounds like an execution at close range, normally I would side with the police, but this looks like a plain and simple hit.