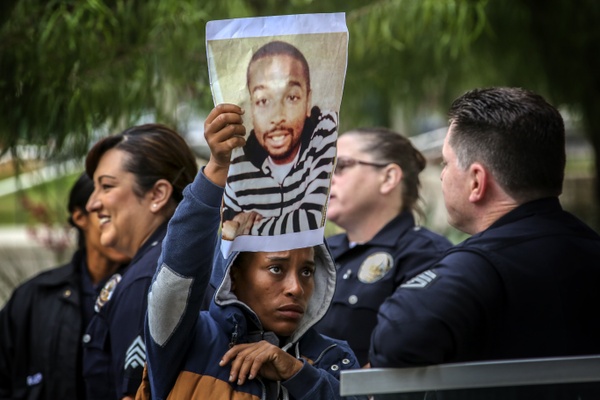 The Los Angeles Police Commission went against the recommendations of Los Angeles police officials June 9, finding that one of the two officers who shot 25-year-old Ezell Earl Ford in 2014 was unjustified in drawing and firing his weapon.

The civilian panel that oversees the Los Angeles Police Department also found that Officer Sharlton Wampler used unacceptable tactics when he and his partner, Antonio Villegas, stopped the mentally ill black man on the street near his home on Aug. 11, 2014, near West 65th Street and Broadway in a drug- and gang-infested block of Florence.

Wampler told investigators he used a backup weapon to shoot Ford because he thought the man was trying to grab his gun as they tussled on the ground. Villegas said he fired when he thought his partner was in trouble.

The commission found Villegas less culpable. It faulted him for his decision to draw his weapon early in the confrontation, but said he was right to fire his weapon to protect his partner.

The five-member commission judges on three issues after an officer-involved shooting: the officer's use of deadly force, the officer's decision to draw a weapon and the tactics the officer used throughout the encounter.

In separate investigations, Beck and Bustamante determined that both officers were justified in shooting Ford, sources told the Los Angeles Times on June 5. However,  the inspector general faulted the officers for how they approached Ford in the moments that led to the shooting, sources told The Times.

It is now up to the police chief to decide what, if any, punishment to impose on the officers. Beck's decision will not be made public under a state law that gives police officers sweeping privacy rights.

The incident began when Wampler and Villegas, members of the LAPD’s Newton Division anti-gang unit, approached Ford as he was walking on the sidewalk about 8:10 p.m.

The officers told investigators they stopped Ford because they thought he was trying to discard narcotics as he walked away from them. After the shooting, investigators found no drugs or weapons on Ford or nearby.

Wampler put his hands on Ford, a move the inspector general found unacceptable, the sources said. Department protocols instruct officers to address a suspect from a position of safety, such as behind an open car door.

Ford, who had been diagnosed with bipolar disorder and schizophrenia, allegedly whirled around and attacked Wampler, who fell to the ground.

Investigators said Ford grabbed for Wampler’s weapon and the officer called for help. Ford was shot twice by Villegas and once by Wampler, who pulled out a backup weapon and shot the victim in the back.

Ford’s mother, Tritobia Ford, praised the panel for its decision. The ruling, she said, "strongly, on the record, stated that what happened to Ezell was wrong."

After months of silence, Ford's mother has been critical of Beck, and the secrecy surrounding the investigation. She has asked the U.S. Justice Department to investigate her son’s death and called on Los Angeles County Dist. Atty. Jackie Lacey to file criminal charges against the officers.

Ford's family have filed wrongful-death lawsuits against the department in state and federal courts. They and their supporters have also been critical of Los Angeles Mayor Eric Garcetti, for not addressing the issue.

Protesters confronted Garcetti outside his Hancock Park home the morning of June 8, accusing him of hiding and avoiding the issue. Garcetti told the protesters he had to catch a plane to Washington, D.C., for a “prescheduled” meeting to try to secure federal funding to combat homelessness.

In a statement released early that morning, Garcetti said his heart went out to Tritobia Ford and her family, and he hoped to meet with her “in the coming days.”

Ford said she met with Garcetti June 10, and the two prayed together. "Even though it was 10 months late, I thank him."