'He was just a big old kid': Family of man killed by Bell police question whether he had knife out 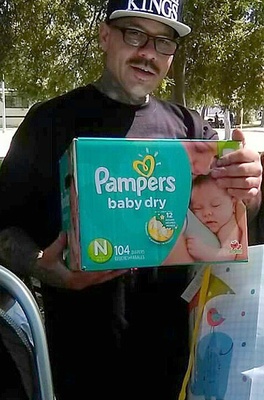 At 6-foot-2, with his gang past and numerous tattoos, 37-year-old Vinson Lee Ramos could seem intimidating, his sister said. But since his release from prison five years ago, he'd found work, attended college and was eagerly anticipating the birth of his son.

"He was trying his hardest to be a regular person," said Rashell Ramos-Vazquez, Ramos' oldest sister. "He wanted so much that his son not go the way he did."

On July 7, Ramos became her third brother killed by gun violence. Leroy Vincent Ramos Jr. was fatally shot in Long Beach on Aug. 30, 1990, when he was 17, "and he wasn't even involved in gangs," she said. Ramos' identical twin, Vincent Ramos, was killed in Long Beach on April 30, 2010, while his twin was in prison.

Three Bell Police officers shot Vinson Lee Ramos on July 7 in the parking lot of a Bell convenience store. Authorities said he walked toward the officers with a knife.

Family members are questioning whether Ramos had a knife out.

Vinson Lee Ramos worked at a warehouse, Ramos-Vazquez said, and carried a knife in his pocket to open boxes on the job. His girlfriend, who was with him that day, told Ramos-Vazquez that she never saw him take out his knife.

"She said he had a cigarette in his hand, and he put his hands up, but she did not see the knife," said Ramos-Vazquez. She said investigators told her there is security camera footage of the shooting, but they haven’t responded to her request to see it.

But Det. Eduardo Aguirre, who is investigating the shooting, said security camera footage shows that Ramos was carrying a knife with the blade exposed and was walking toward the officers.

Ramos was pronounced dead at the scene, in the 7100 block of South Atlantic Avenue, with multiple gunshot wounds, according to Los Angeles County coroner’s records. No one else was injured.

The Bell Police Department identified three veteran patrol officers who fired their weapons that day: George Balandran, Rolando Carranza and Jose Garcia. Balandran has been with the department 18 years, Carranza 15 and Garcia 13.

The officers were called about 8:30 a.m. by store employees who said Ramos had been acting aggressively toward his girlfriend, who was eight months pregnant and accompanied by her 5-year-old son, said Los Angeles County Sheriff’s Sgt. Bill Cotter, who is heading up the shooting investigation.

Ramos-Vazquez said her brother may have looked scary, “but he was just a big old kid,” willing to play Candyland with her young daughter and plan his own baby shower in Long Beach — complete with catered food and baby clothes as decorations.

Her brother had a temper, and he and his girlfriend often yelled at each other, “but they loved each other too,” she said. “This was his first child, and he was happy. He told me, 'I want the life you have. I want to come home after work and be with my family.'"

The family found out about Ramos' shooting on television news, she said, and didn’t get official confirmation until they tracked down the detective late in the afternoon.

Investigators told her Ramos was acting strange and shouting at the officers to kill him, but that explanation upset her.

"If he's mentally unstable,” she said, “isn't there any other way to handle that than to just shoot him immediately?"

The shooting is under investigation. Anyone with information can call the Sheriff’s Department Homicide Bureau at (323) 890-5500. Those wishing to remain anonymous should call Crime Stoppers at (800) 222-8477.

Photo: Vinson Lee Ramos shows off one of the gifts he and his girlfriend received at the baby shower he organized two weeks before he died. Credit: Emerald Vazquez

Update, 5:56 p.m., Sept. 11: This article was updated to add Det. Eduardo Aguirre's description of what video of the shooting shows and other comments about the footage. This article was originally published Sept. 7 at 2 p.m.

I miss you my love everyday kids logan misses you talks about u wish you could of met baby jr looks exactly like you..mery xmas love your always on my mind and heart....love you forever nely y sporty

Think of u everyday Vinson... love and miss u 💙

I MISS YOU MY LOVE praying for JUSTICE