After years of calm, a brazen shooting has Jordan Downs on edge again 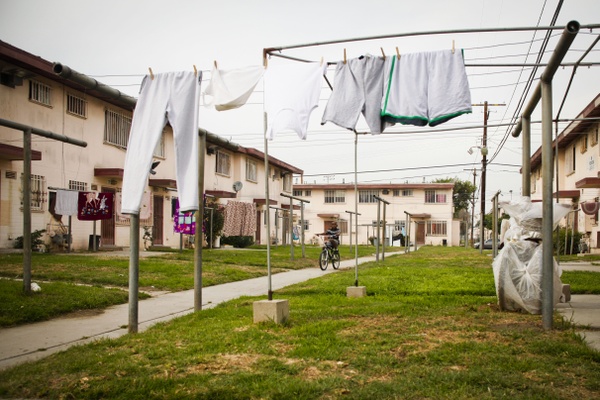 By all accounts, the act was brazen. At least one person walked into the Jordan Downs housing development last month and opened fire, wounding three people.

Five days later, on March 18, James "Bo Pete" Daniels Jr. died at a hospital — becoming the first person to be killed inside the once notoriously dangerous Watts housing development in nearly four years.

From 2000 through mid-2011, 25 people were killed inside the development, long the turf of the Grape Street Crips. But in recent years, residents haven't awakened to police tape or been blocked out of their homes for hours at a time for a homicide investigation, with a helicopter buzzing overhead.

The development, which used to be predominantly black and is now mostly Latino, has seen other signs of hope.

There's a $1-billion plan to revitalize the area by replacing the 700 units in Jordan Downs with mixed-income apartments and a shopping center.

Police, who once entered the development only in teams, have built relationships with residents through foot beats, community activities and outreach as part of the LAPD's Community Safety Partnership.

But the killing of Daniels, 51, has scared residents and strained their relationship with police. People are asking why officers, who were in the area at the time of the shooting, weren't able to prevent it. And they want to know what was caught on one of the many cameras that were installed in the developments years ago.

Investigators said they're looking for witnesses and declined to comment on the surveillance footage. It is unknown why Daniels, who worked in the area as a custodian, was targeted.

Daniels, a native of Jordan Downs, was well-known in the community. In recent years, he had taken advantage of programs in the area and was known as a success story.

"He was always willing to share his story with people, and that gave people hope," said Troy Vaughn, the chief operating officer for Shields for Families, a nonprofit that oversees the vocational program where Daniels worked. A conference room there has been dedicated in his name.

Robert Thomas, who had known Daniels for more than 30 years, said the shooting has people on edge.

"How safe are we?" he said. "That someone can walk up and do this?" 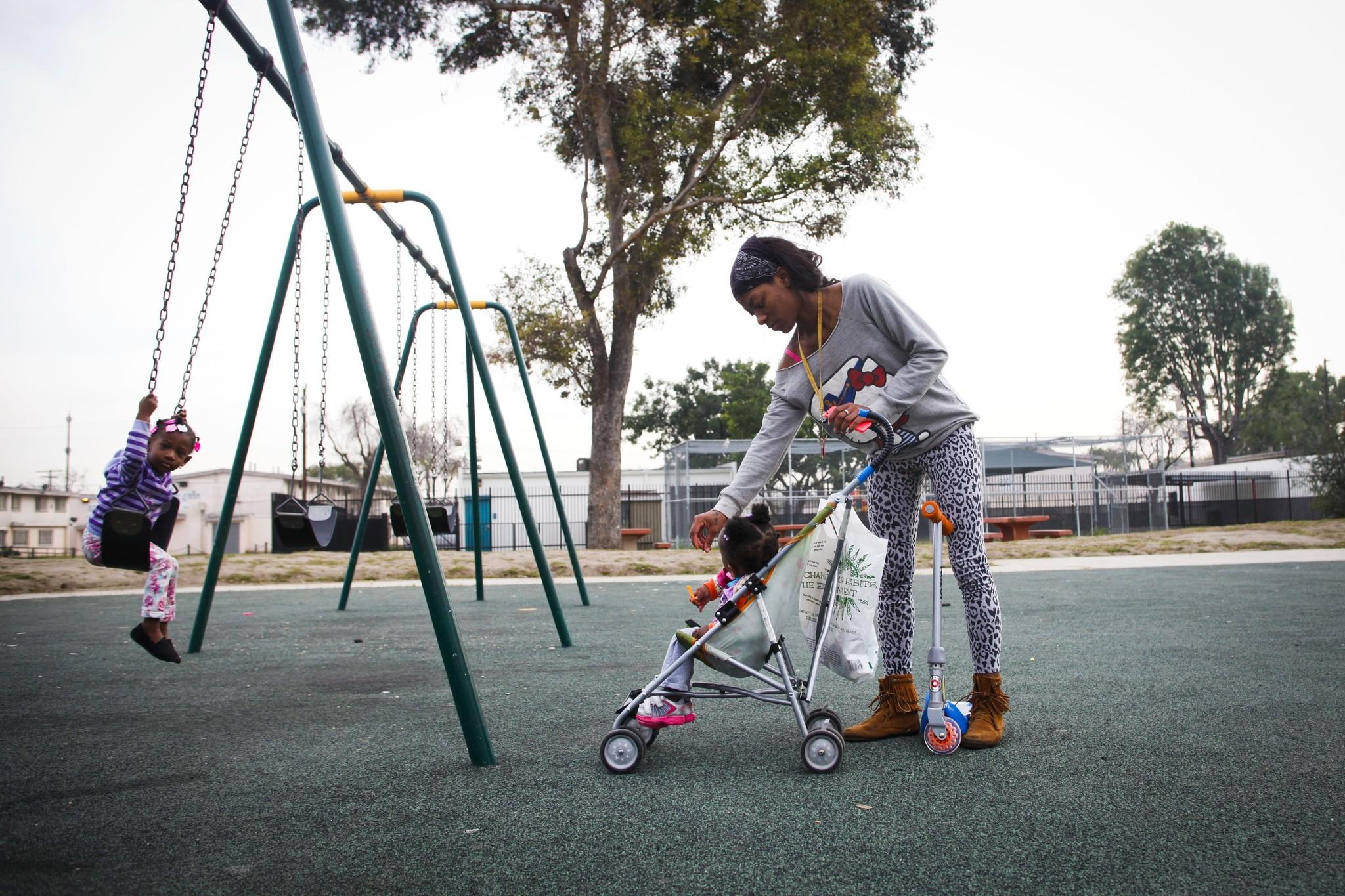 Orange wax stuck to the sidewalk off East 102nd Street where candles still mark where a vigil was held for Daniels. Latonya Mozek, his ex-wife, has lived a few doors down for decades.

Mozek said that Daniels, with whom she was still friendly, was a hard worker who "never bothered nobody." She wasn't home when the shooting happened, but when she got a phone call from a friend, "it was unbelievable," she said. Now, she fears more violence.

"I'm afraid to take out my trash," she said on a recent afternoon, standing near a stoop in the development.

Sgt. Emada Tingirides, who heads the Community Safety Partnership, said that when she got word of the shooting, she was sick to her stomach. The community has been shaken by the killing, she said, because it's no longer accustomed to violence.

"We haven't seen that in such a long time," she said. "It was extremely alarming, calculating, bold and brazen."

Tingirides said she walks through the development and feels the "lingering sense of fear" that she remembers years ago, but what's changed from that time is the pride residents have for their neighborhood.

The message Tingirides said she's hearing is: "We're not going to accept this type of behavior."

Still, Kathy Wooten, a gang intervention worker in Watts, worries that the hard work making the area peaceful may be on shaky ground.

"The reality is, there has been progress made," she said. "But when someone dies, it takes me back to, 'Are we doing enough?'"

In the wake of the killing, gang intervention workers in the area are talking to current and former gang members. They want peace.

Ms./Mr. Alcott,
How can you guarantee Felicia anything...that is awfully bold if not noble of you to guarantee her an empty promise. We can all say leave but how does she go about saving for that move. Jordan Downs is low income housing and if Felicia lives in Jordan Downs that means that she is paying minimum amount of rent. But more importantly how about detailing how exactly she should move, how exactly she should get there, and finally what exactly your guarantee her? Your promise doesn't add up to more than what the democrats have created: a society dependent on social services. Are democrat Mr./Ms. Alcott? Is that why your guarantee was full of empty promises?

Felicia and Diniceia sound like decent people who have obviously suffered through a lot of tragedy. And If I read Diniceia's post correctly, she got the heck out of there. I know Jordan Downs is home to a lot and that Watts is home to even more people, but when you are responsible for more than yourself (family including children) a decision must be made to see that that are raised in the best of circumstances. It's time to go Felicia. Pack your bags and leave and I guarantee you a better outcomes! Where? You pick! How about Inland, but Leaving the State altogether wouldn't be bad idea.

@Diniceia, my sympathy for the losses that you have had to endure. You are absolutely right. Many of us are quick to say the police got a problem with us. Although that be true to some extent, we too have a problem with EACH OTHER. We are quick to yell out in protest Blacklivesmatter! Well who should it matter first to? Them or us? If we don't care about putting a bullet or a knife in each other's head and back than don't be surprised at how some of them feel. Many don't respect themselves, women, children and the elderly. We didn't use to be this way. It is a sad cycle and I'm sure maddening to those who have to live and raise their children in this environment. The truth is no one has to stay in this situation, you can pick yourself up and move! I'm glad you moved away and I hope you NEVER have to go back. God has His eyes on not only those that kill by color of authority but the ones of color that kill each other. When we all meet up at judgment day it won't be as wonderful as many think....His wrath will be unleashed on all those who practiced sin and died in it. Blessings and peace to you.

I recently moved away from watts I also grew up there.in I had to See a lot of my family members killed there my couch crim also known as twin in quentel Gordon was killed over there then my husband was killed by a friend he supposed to had. Kenny Harris 8/9/14 he was a faithful person to all who knew him. Its sad black people can't live in a community without hurting each other. Sometimes I honestly fill half them over there in the projects are miserable in need to find God. No not to pass judgement but we already have to fight hard for the color of out skin in now we fighting hard to be loved by our own color. We better get it right before we get left.

What happened in the jordan downs to mr. James Daniels is a tragedy that could have been prevented had law enforcement focused more on the aggressors. Events leading up to the shooting pointed squarely to one particular gang and the LAPD knew this. The LAPD instead harrased the residents of the jordan downs instead of focusing on who was doing the shooting and how these guys were able to make it out of their particular part of their neighborhood with automatic weapons. The young men of the jordan downs were constantly harrased in light of law enforcement knowing that they were not the aggressive party and wasn't the ones doing the shooting. The jordan downs community as a whole feel that what happened with Mr. James Daniels could have been prevented if the LAPD had focused on who was rumored to be doing all this shooting...they knew just like everyone in the community knew who was doing this but instead they constantly harrased our residents. People who were mourning the lost of loved ones were told they couldn't mourn or that they could only mourn for a certain time. This is not a gang issue thats going towards the LAPD this is a community issue and the people of the jordan downs are sick and tired of the harrasement at the hands of LAPD officers

James Daniels was a very close friend I've been knowing BoPete for over 30 something years and he will be truly miss. I also has had family members kill my two brothers on 12-9- 03 my brother(Shaffy) Andre McNeil then on 8-28-03 28,2011 my brother (TEO) Antonio Mc Neil and my nephew (Gus)Maruio Proctor killed and my cousins (Diablo) Chris Perkins killed on 10-18-07 and his brother (Wayne) Clifton Perkins in 84 and my cousin Tyrone Reily was killed on 12-13-79 all in the Jordan Downs Projects when the killing going to STOP???