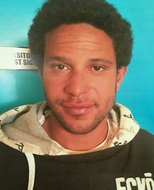 Brendon K. Glenn, a 29-year-old black man, was shot and killed by a Los Angeles police officer on Wednesday, May 6, in Venice, according to Los Angeles County coroner’s records.

Glenn was a “traveler” who went by the name “Dizzle,”  friends told the Los Angeles Times. He and his black Lab, Dozer, had been panhandling outside a bar at 80 Windward Avenue shortly before he was shot by Clifford Proctor, a 50-year-old black LAPD officer.

Proctor and his unidentified partner were called to the area about 11:20 p.m. on Tuesday, May 5, to check out a complaint about a homeless man “harassing customers,” according to an LAPD news release. The two officers spoke briefly with Glenn, who headed back toward the boardwalk.

The officers returned to their patrol car, but a short time later they saw Glenn “physically struggling” with a bouncer outside a bar, investigators said. When the officers tried to detain Glenn, a “physical altercation” ensued between the three.

During the struggle, Proctor reportedly stepped back and fired at Glenn, investigators said. The officers called an ambulance and performed CPR at the scene, according to the LAPD. Paramedics took Glenn to a local hospital, but he was pronounced dead at 12:16 a.m.

The LAPD news release said one of the two officers received medical treatment for an injured knee. The injured officer was not identified.

Glenn was described by friends and family as a kind, loving man with a drinking problem. He grew up in Troy, N.Y., where his family resides. A gofundme.com campaign to send Glenn's body back to New York for burial was launched on May 8.

Proctor is a seven-year veteran of the LAPD. He was the subject of a criminal investigation last year for omitting witness statements in a police report.

The Los Angeles County district attorney’s office did not charge Proctor in that case but in a memo, prosecutors faulted the officer for not including statements from two witnesses that he "should reasonably have known … were material to the investigation and should have been included in the report.”

LAPD Chief Charlie Beck told reporters on May 6 that he had reviewed a video recording of the incident and was "very concerned" about the shooting. Beck's remarks drew a strong reaction from the president of the union who represents rank-and-file officers, who criticized the comments as "completely irresponsible" considering the investigation was still in its "early stages."

Share a memory or thought about Brendon K. Glenn

This article sanitizes Brandon's murder. I was told by eye witnesses that Brandon had been drinking and got into a dispute. He was on the street when Proctor and an Asian cop rolled up on Brandon. It was Cinco de Mayo and there people on Windward. Brendan argued that he wasnt bothering anyone. He was drunk and in a bad mood. Apparently the two officers left. Then returned and grabbed him wr3stling him to the ground. PROCTOR SHOT HIM DEAD IN THE BACK OF HIS HEAD. IT Was a horrible,shocking and traumatic experience. The tragedy of Brendan was not that another young black man but that he had been working with and mentoring the wild teens who were disrupting Venice. After that violent death. The kids went crazy and were more wild. Venice was shocked by this event occuring in the Plaza but we were all shocked at PC Charlie Beck not prosecuting Proctor for murder. Its true that nobody cares. Not enough to pursue justice for another dead homelessman.

My heart breaks as I read this tragic story.. I can only pray for his family, loved ones, and for his precious pet, Dozer. I pray that someone stepped up to care for him as it seemed that Brendon, AKA- Dizzle cared for him and they cared for each other. As for the officer, it seems this is not his first offense. I hope you never have the privilege of putting that uniform on again, sir. You are a disgrace.. Please, someone take care of Dozer..

Brendon was one of the most kindhearted, smart, respectful man who had some problems like all of us. He moved to California to get his life together. Brendon was my best friend. He taught me so much and came into my life when I was going through hard times and got me through them. He confused a lot to me and it breaks my heart that he never told me he was hurting. He always hid his pain from everyone and he always made sure the people he loved were okay before himself. His ability to make people laugh was incrediable. His smile was contagious and he absoultely loved life. I believe Brendon was truly happy in california but it was hard on him. He always was there for me, no matter what happened and I can say without a doubt that Brendon changed my life and took part of me with him when he was killed. Rest easy babe. I love you.