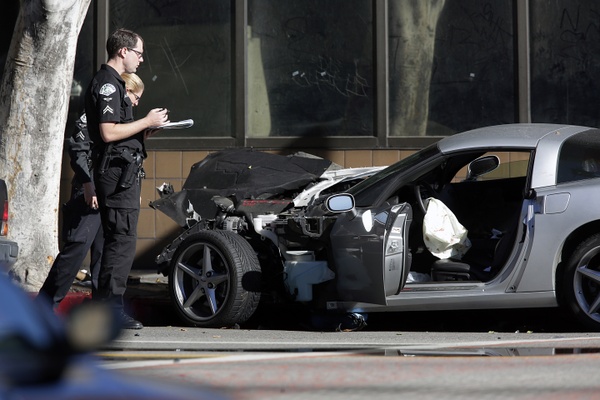 Brian Newt Beaird, a 51-year-old white man, was shot and killed by police in downtown Los Angeles on Dec. 13, 2013, after leading authorities on high-speed chase through South Los Angeles that ended when he crashed his silver Corvette.

Three LAPD officers fired an estimated 22 times at Brian Beaird, who was unarmed. LAPD Chief Charlie Beck has put the officers on extended leave pending a final investigation, saying he was "very concerned" by the incident.

Beaird's father and brother stood outside LAPD headquarters a week after the shooting to announce that they had filed a $20-million claim against the city, a legal precursor required when suing a California government entity. An attorney for the Beaird family said that if the city doesn't reach an agreement, the family would pursue a federal wrongful-death suit.

Bill Beaird described his youngest son as a disabled veteran who was discharged from the National Guard in 1988 after a botched surgery on a brain tumor. The surgery left his son with brain trauma, Beaird said. He could be paranoid, his father said, particularly about police.

John Beaird, the oldest of Bill Beaird's four sons, said his youngest brother "made a lot of bad decisions that day." But, he said, the officers should not have shot him.

"I can only imagine how terrified and alone he was in the last moments of his life," he said.

An investigation into the shooting is underway. The department, which often provides written explanations for police shootings, has provided few details in the case.

Photos: Brian Newt Beaird, in an undated photo courtesy of his family | Police investigators at the scene where a silver Corvette crashed at the intersection of Olympic Blvd. and Los Angeles Street after a pursuit involving multiple police agencies. The driver of the Corvette has died in an officer-involved shooting at the end of chase. (Irfan Khan/ Los Angeles Times)

Share a memory or thought about Brian Newt Beaird

It quite unfortunate that the shooting of this man could have been prevented. This "outstanding citizen" should have never evaded police in such a MANNER THAT PLACED INNOCENT LIVES IN DANGER! What happened to those he collided with? Beaird showed complete disregard for the law and his fellow community members. Regardless, it did not justify his demise; however, his reckless and poor decision making cost him. RIP Beaird.

He was a threat to the public by his actions that day and had to be stopped.

Good thing he didnt hurt anyone.

It's crime what the police did to Brian. If there is any justice in this world those 2 homicidal cops will spend the next 10/20 years in the state prison system, regardless of their corrupt unions. R.I.P. Brian

brian was intelligent and easy going person in life, one of the most honest ,and kind hearted i knew him since 1979..we went to high school together ..i miss him very much,,!!!!!!! i hope all officers involed get fired.!!!..

The cops should of never shot him. He was running away from them. So sad I hope they get every dime.