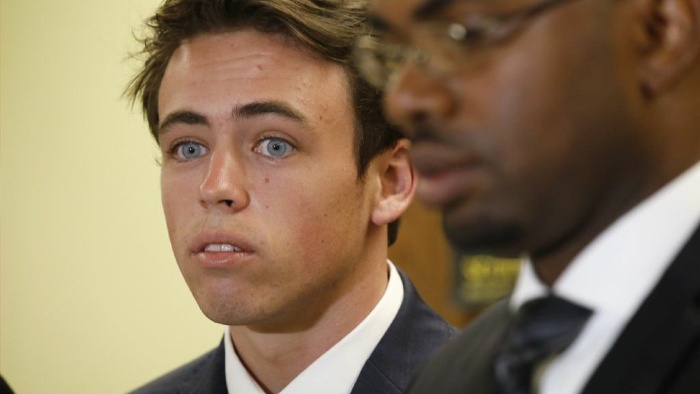 A Palos Verdes Estates man was acquitted Monday on charges of murder and two counts of attempted murder in connection with the fatal shooting of a 21-year-old man in South L.A. last year.

The case made headlines in October after Cameron Terrell, 18, then a senior at Palos Verdes High School, was arrested in connection with the slaying. Prosecutors argued that Terrell joined a gang and drove  two younger members to rival gang territory. The two younger teens got out and confronted three others, including Justin Holmes, who was fatally shot in broad daylight near South Western Avenue and West 78th Street, according to prosecutors. Terrell was released on $5-million bail seven days later.

As the verdicts were read in a downtown Los Angeles courtroom, relatives of Holmes shook their heads and sighed. Several dabbed their eyes with tissues. Terrell, dressed in a navy suit, stared straight ahead. At one point, his defense attorney, Jovan Blacknell, patted him on the back.

After the verdict, Blacknell said that the case was the result of “blatant overcharging” and that prosecutors focused more on Facebook posts and rap music videos than real evidence.

Blacknell said that the evidence showed that Terrell “did not possess any weapons, he did not shoot anybody, he was not part of any conspiracy or any plan or plot to commit any crimes.”

“At best, the evidence suggests that Cameron was a witness, and that’s it,” he said.

A prosecutor did not respond to a request for comment.

Jurors deliberated for nearly a week before reaching a verdict. Twenty-three witnesses were called to testify during the trial, which began July 3.

After Terrell was released from jail last year, parents of students at Palos Verdes High School became angry that he continued to attend classes. School officials and Terrell’s family eventually agreed he would complete his studies off-campus.

Terrell became known to Los Angeles police gang officers in the spring of 2017 through interactions at Jesse Owens Park, a main hangout for the Rollin’ 90s Neighborhood Crips, according to court testimony. Online posts show that Terrell may have started hanging out with gang members the year before.

During the trial, prosecutors argued that the killing was a way for Terrell to gain status within the gang, and they presented the jury with photographs, videos, texts and Facebook messages in which Terrell posed with known gang members, wore gang colors and threw gang signs.

In a video widely circulated after Terrell’s arrest, he’s shown in the background, wearing the gang’s colors and throwing up gang signs. Police found a T-shirt marked with “Milk,” Terrell’s alleged gang moniker, in baby blue on the back in his car. He also spoke to others of his allegiance to the gang and distaste for the gang’s rivals, and had a tattoo of a “W” on his chest to represent the specific clique he claimed, according to court testimony.

“He doesn’t take any of that back to Palos Verdes,” Deputy Dist. Atty. Tricia Taylor told the jury.

On Oct. 1, 2017, Justin Holmes was walking with two friends in the Manchester Square neighborhood when two teenagers walked up to them and one asked what gang they were from, according to authorities.

Holmes worked for U-Haul and was visiting friends on a day off from work.

“They didn’t even see this coming,” Taylor said.

During closing arguments, Taylor said that Holmes was not a gang member but rather a man who was excited about his job and his future.

“You can avoid the membership, but you can’t avoid the violence,” she said of Holmes.

Surveillance video captured near the scene showed two teenagers jumping into a black Mercedes-Benz. The car, registered to Terrell’s father, then sped away.

The criminal case against the two teenagers, who are juveniles, is pending.

Blacknell argued that although a close friend of his had joined a gang, Terrell was not a gang member. Instead he read books about gang life and went on an “L.A. gang binge.”

Terrell, he said, was known in South L.A. for giving away clothing and letting people borrow his luxury car. Terrell, who comes from a wealthy background and lives in a home valued at nearly $2 million, is privileged, Blacknell said, but that came with “a cost,” and with naiveté.

Blacknell said that Terrell got his tattoo — a W in the style of the Washington Nationals baseball team — because his favorite basketball player, Kevin Durant, also has the tattoo.

On the day of the shooting, Terrell thought he and the two other teenagers were going to graffiti the area, his defense attorney said.

Terrell thought that gang life was cool, and was merely trying to study the culture, Blacknell said.

The photographs, videos and text and Facebook messages weren’t real, he argued, but a “fantasy world.”

Blacknell called witnesses to testify to Terrell’s character during the trial. All of them said they didn’t think he could murder another human being.

Terrell, who completed high school off campus, said he will attend college at the University of Houston. After the verdict, Terrell made a brief statement to the media.

“I want to say rest in peace, Justin Holmes,” he said. “He shouldn’t have died that day. I pray for his family every night.”

So he was a get away driver in a shooting that resulted in a death, but because he supposedly didn’t know they were gonna shoot anyone; yet he stayed and waited for them to run back to the car?! By the way the W on his chest is not for his favorite team, it’s for Western Ave. Had no problem reppin 90s on YouTube videos, but he wasn’t a gang member?! Its ok though, karma always has a way of finding you.
Funny how your homies are locked up and you got acquitted..... not all rats have four legs.

"White Privilege" at is finest... They might as well make it legal for a white man to kill colored people again. Because the court continues to prove to us nothing has changed away.

if he didn't get arrested because he was researching gang life then would I be arrested for starting a meth lab to see how a meth lab is run?

White Privilege is REAL. Hundreds of black young men have been found guilty in the same factual scenario. Yet, the jury saw white privilege FIRST. "Oh, he's rich, white...he wouldn't do that." Typically, people drive off when they hear gun shots. White Boy waited...only to speed off when his Gang Banging Homies returned to the car.

90s are Busters for putting a White Boy on. Straight Busters.....

Ok he's a rich white kid, now that we got that out of the way. Make your judgement on the evidence, a murder conviction might of been a far stretch for someone who was not involved or in the planning of the crime. The prosecution should of charged him with a lesser charged, it's usually all or nothing with them.

The language used by his lawyer is awful , he acts as though this kids was doin a case study on gang culture instead of being a willing participant, his words were so loaded it makes me furious, those two young brothers still awiating trial arent being afforded the same defense cuz we know its BS

@Stacy. The family of the victims were awarded 33million in the OJ case. HOWEVER, there was a preponderance of physical evidence that linked OJ to the crime. Yes, the standard of guilt in a Civil case is easier to establish than a civil case, but it will be hard for the victim's family to attain a judgement. I believe the guy should have been charged as an accessory by the way. Oh yea, I'm Black--don't let the name fool ya. Don't play the race card on me vis a vis our discussion. Race certainly played a factor in the verdict.

Another case of affluenza!

@Jackie. It is crazy--the verdict. However, any lawsuit brought against him by the family of the victim probably will not result in a civil judgement against the kid; if the criminal case did not result in a guilty verdict, it's unlikely they can win the civil case... Lady justice is not blind...

I agree Jacqueline. I have a relative that received a guilty verdict with way less evidence got 40 yr and was only in the car. Was not the driver, or the shooter. the victim lived and admitted that he didn’t see who
Shot him yet guilty was given and 40 yrs handed out to a 19 yr old kid for simply proving that he was in the car

This is crazy, money is power! This kid drove the car! He didnt pull the trigger, but he's involved in the murder. Different
verdicts for white kids. Let it had been a black person driving, they would be charged with murder. We see it all the time, they hang the black kids. Let's see what kind of time they give the black minors. WHITE, PALOS VERDE KID, WITH 5 MILLION DOLLAR CASH BAIL! #NOJUSTICEFORJUSTIN
God will tale care of him, he didn't get away!
#NOJUSTICEFORJUSTIN

I hope the victims family sues this murderer for everything he and his family have!!! Theres no reason this kid should be allowed to continue his life as if he didnt do a damn thing!! Once again, the judicial system failed. FAILED! SMH