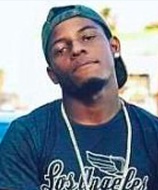 Justin Alongino Holmes, a 21-year-old black man, was shot and killed Sunday, Oct. 1, in the 7800 block of South Western Avenue in Manchester Square, according to Los Angeles County coroner’s records.

About 11:26 a.m., Holmes and two others were walking west on West 78th Street approaching South Western Avenue when two people approached and asked what gang they were from, said Los Angeles Police Det. Dave Garrido.

One man pulled out a gun and shot Holmes, Garrido said. The two people with Holmes ran from the gunfire.

The gunman and the accomplice ran to a waiting black sedan, which fled south in an alley off South Western Avenue, police said.

Holmes was taken to a hospital, where he was pronounced dead at 12:02 p.m., according to coroner’s records.

Holmes is not a documented gang member, Garrido said.

Share a memory or thought about Justin Alongino Holmes

His death will make a difference.

the white privileged kid is in jail again from playing other ghetto games. you can get by, but you cant get away...

RIP my brother . We can’t just read the good book or only go to church .we have to live by those words of GOD . How can we hate flesh an love something we never seen .John1.GOD is love he’s don’t have a particular favor he love all favors.we have to pray deep an hard in our heart for forgiveness.But another young man we lay to rest.But we shall rejoice in glory an thank u lord for the time my brother was with us on earth an we will an shall over come this senseless act of hatred. RIP

This is a sad story. Some people really have no respect for another person's life and sometimes property. Where does so much hate and lack of compassion come from? There are numerous cases of young black teens getting long prison terms that were not the trigger pullers. Why is the white teen different? One case I saw a few months ago was a teenager who sat in a vehicle while his friends said they were going inside a store to buy some items. They instead was stealing and had a weapon. Why was he found guilty so easily when he didn't participate in the actual shooting? Paying for a crime or not should be equal, i.e, Just as in Justice not Privilege for some based on race or even money. Condolences to the family. That is not justice for their son.

So sorry prayers for the families

This is pretty cold blooded. I actually was for the white boy getting off since he did not shoot until I found out he was recording friends kicking over candles. Now that is a whole another level of disrespect.

I follow this case from the beginning. It doesn’t surprise me that one of the suspects ( Cameron Terrel ) white privileged kid from Palos Verdes was acquitted of the murder of this young men. The judicial system is a joke. Clearly this white thug was involved in the murder of Justin Holmes but once again we get slap on the face by a broken system that only works for the rich and white. I am disgusted by the Supreme Court and the jury panel that worked this case.

This hurts so much! This is the first murder in my family!!!! Justin was my nephew. He was never in any gangs although he grew up in a gang infested area. His parents kept him busy and out of trouble. He went to Miles College in Alabama.

My prayer is that young people, regardless of nationality, get some respect for life (theirs and the lives of others). Senseless murders are just that...senseless!