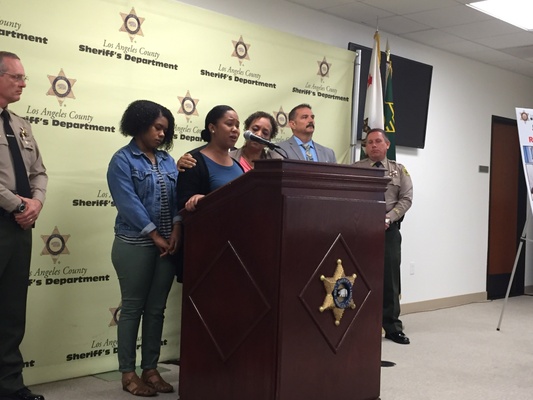 Nicole Walker stepped up to the podium at downtown Los Angeles' Hall of Justice as tears filled her eyes.

The 25-year-old described the pain of losing her older brother, a man she said was changing his life.

The prospect, she said, of turning 26, the same age as her brother at the time of his killing, “has weighed heavily on me,” she said.

“He was my first best friend,” she said.

Walker and her family are still reeling from the loss of 26-year-old Christopher Walker, who was shot and killed at a burger stand in Altadena on Oct. 30, 2014.

Authorities, who said they have “exhausted all leads,” announced a $20,000 reward at a news conference Wednesday. Specifically, they are looking for anyone who was in the area at the time of the shooting or lived nearby.

About 4:30 p.m. that day, Walker ordered food at Fair Oaks Burger, then sat down to wait with his back toward Fair Oaks Boulevard. A black man, between 18 and 24 years old with a medium build, got out of a light-colored sedan and shot at Walker, then fled.

“There were definitely people at the restaurant besides Christopher,” said L.A. County Sheriff's Sgt. Chaffey Shepherd, who is investigating the killing.

Although Walker had troubles in his past, he had recently returned from living in Arizona to be closer to family. He held a full time job in marketing and was taking care of his two children.

“We ask for your help,” said Richard Walker, Christopher’s father. “This has to stop.”

After their son's death, Richard and his wife, Ursula Walker, have questioned why there isn't more outrage regarding black-on-black killings.

On work days, Christopher arrived at his parents' house by 5:50 a.m. and would drive with his mother to downtown L.A., where the two worked just blocks away from each other.

Nicole Walker remembers when her big brother turned 25. She posted a status on Facebook, saying she was proud. “He had the will to do better,” she said. “And he was doing better.”

Perhaps you did not get the entire story. While it is true that he was involved with gangs at as a kid. However, for the record, at the age of just 5-years old, Christopher was secretly gang influenced right under our noses. Not only was it true that many of the park kids were from homes in which gang allegiance was the norm, but years later we would discover that many of the adults volunteers working and coaching these kids, unfortunately, adhered to this culture as well.

Access to these fresh minds at this age, made it easy for hate-filled people to conveniently use game dug-out and other times while out of the ear shots of caring parents, to introduce this violent life. Once planted, these seeds of evil triggered an interest and allowed a continued indoctrination of the innocent as ball seasons continued. Over time, our smiling kindergartner grew into an angry middle school teenager who “needed” to be at the park on a daily basis.

With this tender age of influence, our son, and those not otherwise a part of this sick way of life, were later given gang names and advised of their “family” status. Unfortunately, over the next few years, many of them (our son included), continued to succumb--and, similar to the tactics of cowardly child molesters, the adults manipulated and convinced the kids to keep their conversations and activities secret.

As Christopher matured, he realized the danger associated with his choices and then exhibited a desire to live life more closely associated with what we (his parents), had initially envisioned for him. The loss of his life
greatly impacts the community on every level. The day of his death, he had completed a successful workday at his downtown LA marketing job. Christopher was a son, a brother, a grandson, a nephew, and a father. He was a law-abiding citizen, a good-standing employee, a paying tenant, a consumer of goods, and a taxpayer--and county officials do not offer monetary rewards in the slaying of gang members. We daily grieve over the senseless slaying of our son, Christopher.

First and foremost, My condolensces to the Walker family, may our Father in heaven be with you through this time of grief..GOD BLESS YOU ALL.. Secondly, Everyone can have a say so and/or personal opinion, which rarely even matters...especially if they didnt know the person... However, speaking from a personal perspective and stating facts... I knew Christopher Walker personally for many many years..over 5+ and I can say I saw the typical teenager caught up in the wrong lifestyle, by becoming a product of his environment, although, he had the type of parents that majority would love to have..they resided in the upper class part of Chris's hometown, there werent any gangs located in his neighborhood persay.. but, as we all with common sense knows..there are gangs even in the most beautiful places... but still always had a good heart in the depths of his soul, he was generous, loved his child which would later become his children, nevertheless, his parents and siblings dearly, not to mention his true friends, he was very comitted to whatever interested him... on the other note, as a MAN he put childish things away.. its unfortunate, that his past may have come back to haunt him, but no one deserve to die senselessly and as a man he himself wasnt acting senseless.. so, when he came back to his hometown.. Leading up to the time of his death...he was in his hometown minding his business and handling business prior to his murder, which he had the right to do as a man.. he shouldnt have restrictions if he is a legal American citizen. so, its not his parents fault as Reggie (commented below)..its the persons fault who chose to pull the trigger along with demonic spirits and the devil himself... REST EASY CHRIS❤… AS the word of GOD said: This to shall pass..and justice will be served..if not on earth...on judgement day it will...
To Chris: R.I.P. you may be Gone but youll never be forgotten... we got birthdays coming up and I will give a toast and take a shot for you #TeamLeo's,lol... Love Ya!😘

On behalf of our entire family, we so very much appreciate the recent reward offered for information leading to the arrest of the person or persons responsible for Christopher's death. We truly hope that through this funding, someone will be encouraged to speak up--as we know there had to have been many witnesses to this crime committed on the patio of a hamburger stand, on a busy street, in broad daylight. The only way these senseless deaths will ever stop, is if those of us in our communities choose to band together and say, "ENOUGH!".

Do better, turn his life around?
Was this man a gang member?
Did he have any ties to Gangs in the area where he was murdered?

Yes this a recurring problem In many communities across our beloved country, people r scared n 2 dam cowardly 2 step up 2 the plate n turn these punks n, who can only sneak up n kill someone n go home n brag about it 2 their fellow demon bro's n whoever they trust 2 not snitch. Well u know what this family may b seeking Justice n that's fine, but the truth of the matter is they unwittingly played a part n their sons demise by allowing him 2 stay connected with his gang-banging comrads, Ya need 2 understand just because you take the banger out the hood, he will return unless he is truly set free, if they had had the concern when he was alive as they do now, we as taxpayers would not b asked 2 foot the bill 4 shit that caught up with, maybe they should go 2 his so-called homey's n ask them 4 money. Don't get me wrong I'm not judging or hateing on this family , but after 3 years 20,000 ain't go make no 1 talk. 2 all of u who harbor gangbangers n turn the other cheek 2 their misdeeds don't come running 2 us, run to the your child n kick his or her ass, do whatever u can 2 get them away from the demons that plague them, if not u 2 will face the cameras.. Oh after the fact !!