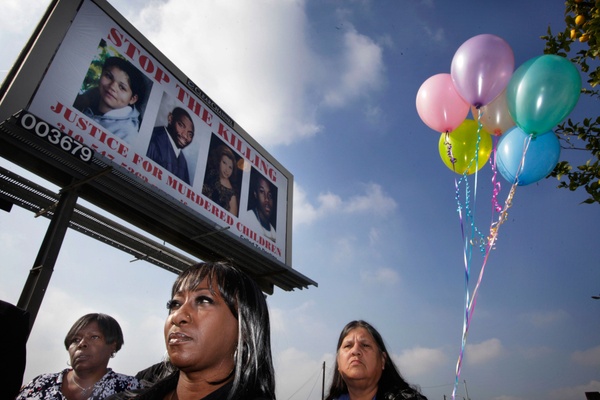 Since their 13-year-old son, Draysean Earl, was gunned down six years ago in Compton, his parents have paid close attention to the news when someone else is killed.

Each year, they hold a march on May 5, the day of the shooting , and each year it seems that another member of their son's circle has been killed.

In 2013, two were gunned down near a McDonald's. In 2014, two more were killed just outside Compton.

In December, Lontrell Lee Turner, 16, was shot to death in Compton on his way home from church. Lontrell knew friends of Draysean.

"As parents we rack our brains to figure out something to stop it, but how do we stop it?" said Sean Earl, Draysean's father.

In a city where the black population is on the decline — falling to a third of the population, according to 2010 census statistics — blacks make up a disproportionate number of homicides in the city.

At one point in Los Angeles' history, Compton was an all-black community. Now, the city of about 100,000 is primarily Latino. Despite the shrinking African American population, however, more than 60% of the homicide victims in Compton last year were black. This year, all but one of the seven victims have been black.

When Sgt. Fred Reynolds started his law enforcement career with the now-disbanded Compton Police Department in the 1980s, the majority of the city's population was black. He said the dominance of African American gangs could be one reason for the high homicide rate among the remaining blacks.

"The black gangs are still entrenched in Compton, even if the demographics have changed," said Reynolds, who is now a homicide detective with the Los Angeles County Sheriff's Department.

But George Tita, a criminologist with UC Irvine, says it's not just about race and ethnicity. He said socioeconomics play a part too. Tita said he saw a similar pattern in certain neighborhoods when he did a study examining interracial killings in South Los Angeles over seven years.

He said the people who stay are the ones who can't afford to leave.

"You're leaving behind the most vulnerable and the most likely to become involved in violence," he said.

It has been 20 years since Vicky D. Lindsey's 19-year-old son was killed. Lindsey, an activist and lifelong Compton resident, has helped many families cope with violence through the years. Sometimes, it hits close to home.

Recently, she heard that one of her younger son's friends was shot to death at a Compton park. He was 29.

— myk ; the prison industrial complex is intent on ensnaring every single person they can.

If you want change, then look to a different party each election day.

The democrats are in charge of the system in this state and they sure dont want it to change. They get lots of campaign donations from the members of the PIC.

Unfortunately, we can lay blame on absentee fathers, but if we do we need to examine the genesis of why the fathers are absent. It would also be a disservice to just blame it on gang life style as a blanket indictment. As a black man who had no criminal record until I was stopped so many times by the police I couldn't pay the traffic fines and lost my drivers license. I eventually ended up going to jail several times and was saddened by what I encountered There were so many young black men who did not know anything other than going to jail. They had no other point of reference other than for lack of a better terms as institutionalized mentality. Going to the penitentiary was a means of gaining cred and elevated their status amongst their peers. It was normal to see one inmate greet another as if it were a reunion. Not one inmate talked about any sort of legal strategy or about some sort of redemption or anything of the sort. They talked of wishing they could hurry up and get to the pen rather than sit in county jail. and that is sad fact.

So to pin the fault of what is at the heart of the homicide rates in Compton or any area where black folks are, it is far beyond just blaming the entire race. I recognize that we must all be accountable for our actions, but we must be seen and treated as individuals. We must think of ourselves as individuals and accept our selves as individuals and must unite to bring about change. We are kidding ourselves in thinking that protests on such a small scale will bring about change. It is tantamount to asking for our freedom when we should already consider ourselves free. It is tantamount to asking for the system to allow us to live when we are already living. We are not a commodity but it has been ingrained in our minds so deeply our youth have accepted this role and throw up their hands. We will always be marginalized and used as commerce for those who profit from our lives. We are not African Americans' we are Americans.

We are at a deficit. We are attempting to catch up when we started from behind. We have been marginalized and as such aren't afforded the fairness nor provided the advantages others have been afforded. We attempt to fit within the confines but as a commodity we just complain and mourn out losses. When the fact is it will get a lot worse before it gets better. And for us to have faith that we will get our later while they have ours today is only setting oneself up for failure. .

The homicide rate is getting out of control again. Compton has 59 known gangs with nearly 10,000 named gang members. It's time for some injunctions to be put in place. Several years an injunction was used and was very successful. We also need more deputies on the streets. There are only 79 deputies assigned to Compton. Divide them between shifts, days off, desk & court time, and you may have 10 of them on the streets at any given time. Not very good odds with 10,000 gangsters running the streets.

These poor kids !! I grew up in park village on Alondra between Wilmington, and Center in Compton . I understand why everyone is violent , you have to be to servive . When I first move there I was 8 yrs old, I was happy go lucky in to sports , then my surroundings go ahold of me. I started to fight to show I wasn't scared even tho I was trembling inside. Then it turned into, "whatever, whenever, for whatever!!" I seen a lot and done a lot, had friends die , that I will not explain . Living in those gates I learned to love it! Couldn't imagine living no way else until I'm all grown up as I thought and my dad moved me out of state. Years go by and I had a kid , not to long later some girls knocked on my door to invite me to church . What I felt at this church was amazing months later I got the Holy Ghost I never knew there was such thing that could break all the hardness within me , and I could have so much peace and joy and true freedom and help to overcome the world and the lust thereof and live clean and raise my child up in all rightness . Now reading all the madness on LA times it breaks my heart and totally rolled back the curtains of memory to see its still the same and getting worse. I thank God he brought me out and kept me I thank him for having a plan for me when all I saw was a dead end street! Praying for an Answer!!

The area is run by a one-political-party system that has sought the destruction of family values in the historic black community. This is the result. It is sad to see the destruction whereas the Latino community, no matter its dislocation and poverty, remains centered around family, religion, culture and language.

— Norwalquero There is only one problem with your argument about fatherless families in the black community.
Most of the missing fathers were/are gang members and gang bangers. This is one of the reasons that they are not in the home. His or her father is probably in jail or dead (killed in a drive-by shooting by another gang member).
You were right on point when you mentioned the glorification of the 'Gang Culture.' This issue need to be addressed.

So the problem, once again, is bad socioeconomics? Just once I would be thrilled to see an article that lays (at least part of) the blame on rampant absentee-fatherism, lack of moral accountability and a culture which glorifies gang membership. Crappy public schools and poor education are a huge problem, and will not improve, thanks to politicians who are bought and paid for by the CA Teachers Union, which will not allow school choice and the opportunity of parents to choose better schools for their kids. The absence of fathers is the greatest problem of all. And, lest you think that is a racist, right-wing talking point, I point you to the comments of President Obama and Tupac Shakur on the subject.

Some of us can leave....we choose to stay and make a difference. .professional young Black female