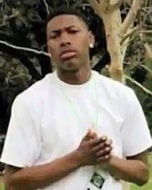 Darius Smith, a 15-year-old black teenager, died Saturday, May 27, after he was shot by an off-duty U.S. Customs and Border Protection officer on North 1st Avenue just south of East Colorado Boulevard in Arcadia, according to Los Angeles County authorities.

Smith, who lived in Pasadena, was riding on the Gold Line Metro Rail with two other boys, 14 and 15, about 8 p.m. on Friday, May 26, said Los Angeles County Sheriff’s Lt. John Corina.

Family members told investigators the boys were going to the Monrovia Street Fair that evening, Corina said. But Smith and his companions got off at the Arcadia station, behind another exiting passenger — a federal Customs and Border Protection officer who was dressed in plain clothes and carrying a backpack and another bag, said Corina.

The officer told investigators that the boys hit him on the side of the head and tried to rob him at gunpoint about a quarter of a mile from the station, so he pulled his duty weapon and shot in self defense, Corina said.

Corina said Smith was shot four times, twice in the buttocks and twice in the chest. Sheriff’s investigators have put a security hold on the autopsy report, meaning it can’t be released until they complete their investigation.

The other 15-year-old boy ran and was not shot, Corina said. He was arrested in a nearby residence later that evening.

Smith ran about a block before he collapsed on Colorado Boulevard. Investigators found an unloaded replica handgun "close by" where Smith fell, Corina said. The metal air gun looks realistic, but it's designed to shoot BBs, he said. Investigators plan to run DNA tests on the air gun to determine whether it was in Smith’s possession, he said.

The federal officer was treated for bruises on his face at a nearby hospital and released, Corina said. The shooting is still under investigation, but there are no plans to arrest the officer, Corina said. "Right now, it looks like he was trying to defend himself."

The officer works at San Francisco International Airport, according to a brief news release from U.S. Customs and Border Protection on May 27. He has worked for the agency for two years, primarily searching luggage, Corina said, and carries a gun as part of his job.

School ended for the year on June 1, but she said grief counselors were sent to both schools on May 30, the day school resumed after the Memorial Day weekend, to help students who knew Smith.

Myricks told CBS 2 News that she doesn’t believe her son and his companions were involved in a robbery. One of the boys was Smith's cousin, she said, and her son dreamed of playing for the NFL. “They aren’t those type of boys to do that,” she said.

Myrick’s attorney, S. Lee Merritt, said the officer who shot Smith should be arrested, in a quote that’s been repeated in news articles and social media.

"Darius Smith was executed,” Merritt said in an interview with ABC 7 News. “He was not in the midst of a robbery. He was shot twice in the legs first. [He fell] and his shooter got over him and shot him three times in the chest. That's murder. That's not subduing the robbery.”

But based on witnesses accounts and video from surveillance cameras at the train station and nearby businesses and homes, Corina said, Merritt’s version of the incident “is totally fake.”

The patchwork of videos, which haven’t been made public, showed the boys and officer on the train, then the boys following the officer out of the station and north on 1st Avenue, Corina said. The officer was listening to music through ear buds and told investigators he was unaware there were people behind him, Corina said.

About half a block south of Colorado Boulevard, in a dark residential area, the video “shows the subjects running up on the victim where the robbery and shooting occurred,” Corina said. It also showed Smith and the other 15-year-old running away and the officer staying at the scene with his gun on the 14-year-old boy, who was lying in the street with gunshot wounds.

Smith ran north on 1st Avenue and then east on Colorado Boulevard, collapsing into the gutter in front of a parked pickup truck, said witness Sergio Carmona, a father of three who lives nearby.

Carmona said he and his fiancee heard four to five shots shortly after 8 p.m., and then watched Smith run down Colorado Avenue until he collapsed near their home. Carmona said he walked outside and looked around briefly before going to Smith’s aid, but he didn’t see anyone else in the street.

“Maybe it was risky, but I was not going to let that boy die by himself,” Carmona said. “I held his hand and asked his name, and he told me it was Darius. I asked where he was shot, and he pointed to his back, he pointed to his abdomen and then he pointed to his shoulder, so I took my shirt off and held it against him.”

By the time he’d taken off his shirt, Carmona said, police cars were speeding up Colorado Boulevard, but they all turned south to the shooting scene on 1st Avenue. Carmona said he tried to wave for officers to come and help him, but they didn’t see him. It wasn’t until after his fiancee called 911 that the officers found them, about five minutes later, he said.

Smith stayed alert throughout, Carmona said. “He told me, ‘It hurts.’ Then he told me he couldn’t breathe and he felt like he was going to pass out, but I told him he had to stay conscious.”

When Arcadia police officers arrived, they also asked Smith his name, Carmona said, and then asked who shot him. “All he said was, ‘An Asian guy,’” Carmona said.

Paramedics came a short time later, he said, and took Smith to the hospital.

Carmona said he didn’t see a gun when he was sitting by Smith. Instead, he said, he was struck by well how the boy was dressed. “He was wearing a hoodie, yes, but it was a nice, zip-up hoodie, with nice jeans and nice shoes and he still had his ear buds next to him. I do not know what happened, but he did not look like someone who left the house to rob somebody.”

Smith’s companions were charged with attempted robbery and assault on May 31, Corina said. The 14-year-old is still in the hospital, but Sarah Ardalani, a spokeswoman for the Los Angeles County district attorney’s office, said the 15-year-old denied a charge of assault with a deadly weapon during his initial hearing in juvenile court on June 1. His next court date is June 15.

Carmona says he’s talked to investigators and the families’ attorneys, and he’s troubled by the different versions of what happened.

This right here is the damn reason nobody takes the black race serious. We have no damn clue what our kids are doing because we don't raise them right and then try to lie and act like they were minding their own business and someone shot them for no reason. Lets start being accountable for our own actions for once and quit blaming everyone else. I'm embarrassed right now. Tell the damn truth and it will set you free.

Coming from where I am coming from this is a very sad. Not just because I knew Darius from the streets or nothing. Its just that every time I saw him he always had us all laugh, there was not a moment when we were not laugh at one of his jokes. He always was trying to take someone on a date to McDonald's. If I could go back in time I would go on a date with him instead of saying "boy your like 12 and I'm 17 we cant go out" even though he was 15 lol. The off-duty officers should be prosecuted.God I miss you so much Darius.Save me a spot up there. 👼🏾🙏🏾❣️😘 #LongLiveDarius #Darius'sLifeMatters

They said a Asian Man Did it SMH

Perhaps these kids didn't set out from their home(s) to rob anyone. Perhaps this was a spur of the moment situation. But aren't most victims victims of opportunity? What is not disputed is that these young men got off at a location that they did not have to get off at. They followed this man and then clearly ran up on him. Those facts are not disputed. There was no good reason for them to follow him, and then to run up on him. Of course these young men had the right to be any where they wanted to be because after all this is the good old USA and there are no restriction to be on any street at any given time. But what we are intelligently discussing there are the action of these young men. Did they get what they had coming to them, I think they got more then they could handle and when the potential victim fought back it was something that they were not prepared for. If they were not at this spot and they did not follow this man with maliciousness, what reason would this person have to take out a gun and shoot?

Don't always believe media and what you read; he was only 15 years of age; and if he was running; he shouldnt have been shot in his back; that is what a coward would do; this "off duty" officer should be prosecuted; he only suffered from minor abrasions and took a life; Darius Smith's life matters!... what if it was your child?- R.I.P Darius; GOD gained an angel and to the murderer GOD will deal with you accordingly; the devil is a lie and he came to kill, steal and destroy!