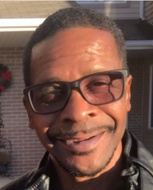 Derek Wilson, a 61-year-old Black man, was shot and killed Tuesday, June 30, in the 1600 block of West 107th Street in Westmont, according to Los Angeles County Medical Examiner-Coroner’s records.

About 1:30 p.m., Wilson was sitting in a white sedan smoking a cigarette when a dark-colored car pulled up, said Los Angeles Sheriff’s Det. Louie Aguilera.

A person walked up to the driver’s side window and began firing at Wilson, Aguilera said.

Wilson was pronounced dead at the scene. Wilson, an ironworker, lived in the area. He didn’t have any gang ties and was set to move out of state the week of his death.

Do you have information to share about the life of Derek Wilson ? The Homicide Report needs your help. Please fill out this form or e-mail us at homicidereport@latimes.com.

Nicole, I am so sorry to hear what happened to your dad. It is a shame that some cowardly punk did this to him. I hope that the killer will be found and put away for life. I pray that God will comfort you and your family during this most difficult time. May Derek rest in peace.

This is my dad. My sweet, kind, loving dad. Someone walked up to his car while he was looking at his phone, and shot into the vehicle 11 times.

My sister is pregnant, and due on July 20th. My daddy will never get to meet his grandson.

I love and miss him so much. I can't understand how or why anyone would be so cruel as to murder an innocent man in cold blood.