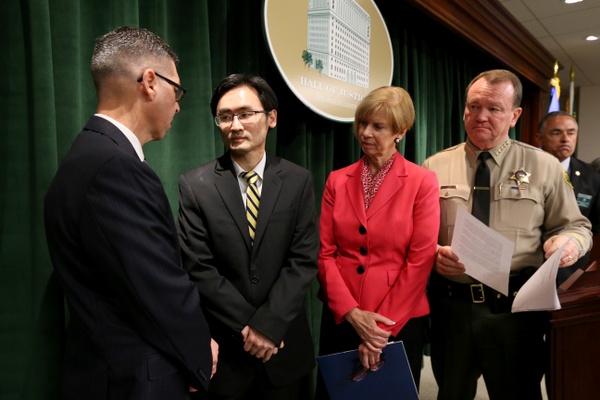 About 9 a.m. on Oct. 20, 2016, a family friend discovered Mei “Marian” Chu Chung, 57, and Cheng “David” Long Wang, 60, inside their home in the 3300 block of Bent Twig Lane in Diamond Bar, authorities said. The couple had been stabbed to death after an apparent struggle, and more than $10,000 in cash was missing from the home, said Los Angeles County Sheriff’s Capt. Steve Katz.

The couple had two adult children. Gary Wang, 31, a doctor of internal medicine in Iowa, flew to Los Angeles for Wednesday’s news conference.

Wang said telling his 4-year-old daughter that her grandparents are in heaven was difficult, and he hopes anyone with information will come forward.

“They were taken away from my life so suddenly, so brutally,” he told reporters.

Wang, a computer programmer, and his wife, Chung, an art teacher, were married for 30 years and were well known in Diamond Bar. Chung hosted art classes for children in a studio in her home.

Detectives are unsure whether the attacker was alone but said there were signs of forced entry into the home. Investigators have interviewed neighbors and canvassed the area.

“This is extremely unusual,” Katz said. “It appears to be isolated and tragic all on its own.” 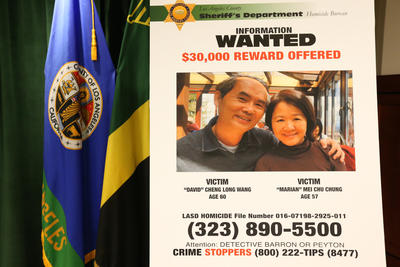 County Supervisor Janice Hahn said the double homicide shocked the upscale community where the couple lived. They were the only people killed in the community of more than 50,000 last year, according to coroner’s data.

Katz said that although detectives have not exhausted all leads, they are looking for more information.

“We are seeking that piece to the puzzle,” he said. “We are in need of a helping hand.”

Wang said the incident has been a “giant tragedy,” but he carries on because he sees his parents in his children.

“I’m not asking much. I’m just asking for some justice for my parents,” Wang said.

Photo, right: A reward poster displayed at the news conference.

A double stabbing and a struggle? There must be fingerprints and DNA all over the place.

Sounds like a targeted home invasion. Only ONE house? Who else could've known they had $10,000 in the house besides the students that were frequently there?

Maybe not the students, but it would definitely seem that someone knew about that money.