California Department of Motor Vehicles officials have stopped releasing the photographs of dead people, changing a longstanding practice that allowed news organizations access to the images.

The decision, according to the DMV, was prompted by dozens of national and international requests for photos of the 14 victims of the San Bernardino terrorist attack in December.

“The DMV is also concerned for family members who must cope with the loss of someone they love, and wants to respect their privacy,” the department said in a statement.

In the case of the terrorism victims, photos of all the dead were quickly available from family and friends. But in many other cases, the DMV often was the most reliable source of a verifiable image.

The Los Angeles Times since has made at least three requests for photographs through the California Public Records Act that were denied by the department.

The denial is linked to a section of California’s Vehicle Code that prohibits the distribution of the photographs unless it is requested by the license or identification card holder.

The DMV also cited another section of the vehicle code that states that all records “relating to the physical … condition of any person … are confidential and not open to public inspection.”

“This prohibition applies to a photograph because it provides information relating to the physical condition of a licensee or identification card holder,” the DMV said in a denial letter.

In response, The Times has written a letter to the department requesting that the DMV reconsider its position.

In the letter, The Times argues that the DMV’s “new interpretation” of these statutes is incorrect.

The Times argued that the public has a “strong interest” in the release of the photographs to the media because it helps journalists verify the identity of a person and accurately report information.

For The Times’ Homicide Report database, DMV photos often are used to give a face to the name of the victims and to give the public a visual of who has died violently in the county. 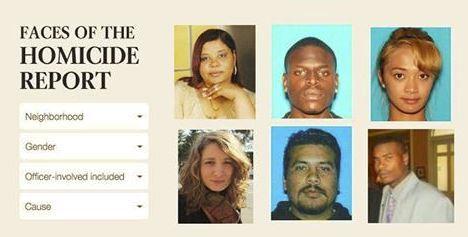 Peter Scheer, the executive director of the First Amendment Coalition, said that it’s “a mistake” for the department to “do a 180” on its policy.

“I don’t see how anyone can say that there’s a privacy interest in these photographs,” he said.

Note: Since its start eight years ago, The Homicide Report has had the goal of a story for every victim. Now we are expanding that goal to include a photo for every victim. So far we've gathered 1,193 victims' photos, just 8.2% of those killed. Help us do better. If you have a photo of a homicide victim to share e-mail it to

This is another clue and anomaly in the san bernardino conspiracy. Maybe they can't release photos they don't have?

I agree with Anonymous and the position the DMV has taken. It should be the family's decision not the DMV or those who feel self-entitled to everything because of "public interest".

I hope the LA Times legal council opens a lawsuit over this. Homicides are the most important criminal event that the public has an absolute need to know. And to put a face to the victims is part of our collective rights.

I agree with the LA Times. The public has an overriding interest on the publication of the image of the homicide victim. Many people may not know the victims name but they may recognize the person from the image. This can lead to additional tips for the police or additional support for the victims family.

Good. I disagree, it is a privacy issue with photos being arbitrarily released of the deceadants. A published picture for a "story" should be with the consent of the family. This is not just a "story" for those that are living this nightmare. I loss my son to murder and would be livid if a picture was posted of him without my consent. I personally am one that does NOT want my son's picture posted in the La Times and this should be MY right. It is bad enough of having to live with the constant reminders let alone another story online with a photo that was not authorized. I feel it is quite disrespectful to the person that died and their loved ones. I know my son would be angry if his picture was plastered up like that forever online...For some this may be okay to do, but for others it is not okay. Therefore, families should be left with the decision, not the DMV.