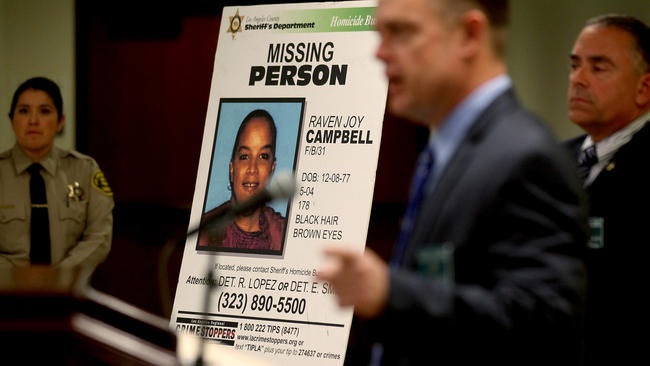 A 43-year-old man was charged Monday in the killing of a woman whose body was found behind a wall in a Lomita apartment last year, according to the Los Angeles County district attorney’s office.

Randolph Garbutt, a black man, is scheduled to be arraigned March 1 in L.A. County Superior Court in Torrance.

Garbutt has been charged with one count of murder with the allegation that he used a hammer to kill Raven Campbell, a 37-year-old woman who was reported missing in June 2009, according to prosecutors.

Campbell died of blunt-force trauma to the head, authorities said.

Campbell’s remains were found last summer after detectives received a tip leading them to an apartment in unincorporated Lomita. In July, authorities searched the home, which was occupied by another family, and found repaired drywall behind the stairs.

In December 2008, Campbell moved into an apartment at the Harbor Hill Housing Project with a high school friend and her boyfriend, sheriff's Lt. Steve Jauch said.

For six years, Campbell’s disappearance remained a mystery, which was compounded by the fact that her purse was left at the home.

“She had a tic ... and that was not leaving her purse,” Malaikah Manasseh, Campbell’s sister, previously told The Times.

Her sister, she said, always had her purse strapped against her chest.

Garbutt was taken into custody Thursday as he was about to leave a courthouse after he was apprehended on an outstanding traffic warrant, Jauch said.

Garbutt was released on time served in the traffic case, but homicide detectives took him into custody in the slaying case.

According to online Sheriff’s Department records, Garbutt is being held on $1-million bail.

Photo: L.A. County sheriff's Lt. Steve Jauch holds a news conference Feb. 5 to announce the arrest of a suspect in the death of Raven Joy Campbell, whose remains were found in a wall at a Lomita residence. Credit: Luis Sinco, Los Angeles Times