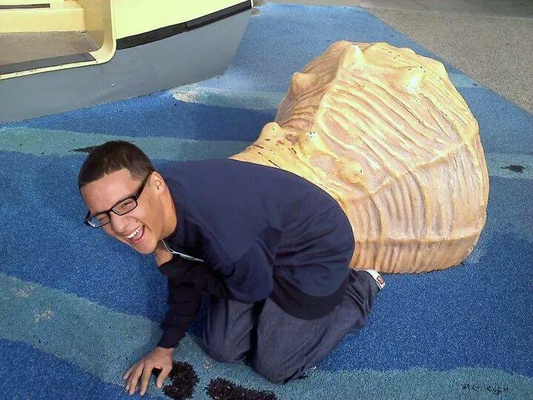 When Darci Jimenez and her brother Carlos were young, they once asked each other, “What would you do if you had one day to live?”

“I’d have a big old barbecue and feed all the kids who were hungry,” Carlos told her.

So his sister got chills when she discovered that just a few hours before Carlos was shot to death in a neighbor’s garage in May 2011, he had bought a bunch of meat for a barbecue at the home.

More than four years later, the killing remains unsolved, but his family is hopeful that a new $10,000 reward offered by the Pomona Police Department will help find the people who shot Carlos multiple times in the 2400 block of Chanslor Street on May 14, 2011. Carlos was shot a few houses away from where he lived with his sister, their baby brother and their single mother, Connie Stein-Jimenez.

Carlos and Darci had lived with their father in Florida for six years before they moved in with Connie in early 2010. Connie was unemployed then, and the home was the best she could afford for herself and three children.

Connie didn’t realize she’d moved into a gang stronghold, she said, and her children were naive about gang culture. Carlos was barely 18 and eager to fit in. The kids his age were suspicious of him, she said, and the people he tried to befriend treated him poorly. Carlos kept trying, and what worries his family the most is the possibility that the people who killed him were people he had considered friends.

“The people that did this to him, I don’t want to see them die,” Connie said. “I just want them to go to prison, and remember every day, the person who probably would have written to you or brought you food while you were in prison, he’s the one you killed.”

Carlos’ death wasn’t the only horror for the family. They are still trying to recover from the sheer number of young people who were killed while they lived in the neighborhood — many of whom they knew. Darci, now 27, gave up on California entirely and moved back to Florida, where she is studying to become a dental hygienist.

“I miss my mom and my brother, but I couldn’t handle it anymore,” she said. “Pomona traumatized me. We only lived there a couple of years, but I saw more dead bodies living in Pomona than I had in my entire life.”

Just in their neighborhood, the killings included:

• Casandra Jacobo, 17, Carlos' first friend in the neighborhood. He was walking her home about 11 p.m. on March 16, 2010, a short time after he moved to Pomona, when they were confronted by two men who wanted to know their gang affiliation. They denied belonging to a gang, Connie said, and the men opened fire. Carlos survived. Casandra was killed.

Justin had been a frequent visitor to their home. Carlos knew that Justin was often home alone and worried about him having enough to eat. Carlos started taking food from home to feed Justin at a time when Connie was on public assistance, struggling to feed her own family.

“We got into a fight about it and finally I told him to just bring Justin here for dinner, because I couldn’t afford to have him giving away our food,” she said. “After that, Justin came here regularly for dinner.”

Connie finally found a job in public transportation and moved to another county with her younger son. He was 10 when Carlos was killed and so traumatized that he stopped attending school for a while. He’s better now, and back in class, Connie said, but he’s still fearful and rarely goes outside. Returning to their old neighborhood is out of the question.

“If he even sees the signs on the freeway that say Pomona, he gets anxiety,” she said. “We are always afraid, always checking our doors and windows. This really victimized my family.”

Connie keeps in regular contact with investigators in Pomona, hoping for a break in her son’s case. It distresses her, not being able to pass out information about the reward. Knowing this, members of the New Beginning Community Ministry have volunteered to distribute fliers around the neighborhood and throughout Pomona, said Gilbert Zaragoza, the youth minister who oversees the church’s rehabilitation programs.

The church, based in Baldwin Park, has its own sad associations with Pomona. Daniel Diaz, one of the church’s youth pastors, was shot to death in the city on Nov. 11, 2013, less than two miles away from where Carlos died. That year, 29 people were killed in Pomona, a large spike for the city.

Pomona police arrested a suspect in his case this past September. Arvin Benson, a 27-year-old black man, was charged with murder in Diaz’s death, accused of randomly shooting the Latino pastor because of his ethnicity. Benson pleaded not guilty Oct. 20.

The arrest has helped church members find closure, Zaragoza said, and they are hopeful the reward will help find Carlos’ killers, and relieve his family as well. Church members distributed hundreds of fliers Saturday.

“Ultimately, this is an act of solace and comfort for us,” Zaragoza said. “That’s why we go back in.”

Photo: Carlos Jimenez laughing at Universal Studios as he tries to wedge himself inside a giant snail shell, at his big sister's urging. Credit: Darci Jimenez

I remember that day like it was yesterday. It was me his sister and his cousin and his little brother went to Universal Studios. It was a great day that day. But right before he passed away he told me something and what was going on and who to watch out if anything was to go bad. I never said anything to this day. Rest In Peace brotha, you saved my life from other reasons, fam. Miss you dog💯

As we all know there r people who r just evil, lost n led by the devil, these punks n a**holes that come out the womb of a mother, n pro created by men who some r nothing but just sperm donors n they themselves r just as worst then the boy's that they breed.This is why prisons r filled , these sorry fathers can never say 2 GOD u r right, I wasn't there, because I was slelfish n self-centerd, n u so called mothers who put up with the lie's n bull-****from your evil ass kids r going 2 go thru the same suffering your lost children will go thru,n u know what the kick n the head is, u all ignorant people go on n life like ( it's the thing 2 do) n the sad part about us is some of us ( say we believe n GOD) well if tht's tru why r u standing by n allowing the enemy 2 wipe out our children.. Until black folks stand up 4 WHAT'S IS RIGHT N GODS EYESIGHT N TURN AWAY FROM EMBRACING THE EVIL THAT IS COMMITED BY OUR CHILDREN N FAMILY MEMBERS, THE DEVIL WILL CONTINUE 2 TAKE OUt our FRIENDS N FAMILYthat will b eternily lost. NOW DOES BLACK LIVES REALLY MATTER?Think about that...

We said we will never give up Son...and we never will. I Love and miss you so much. Mom.