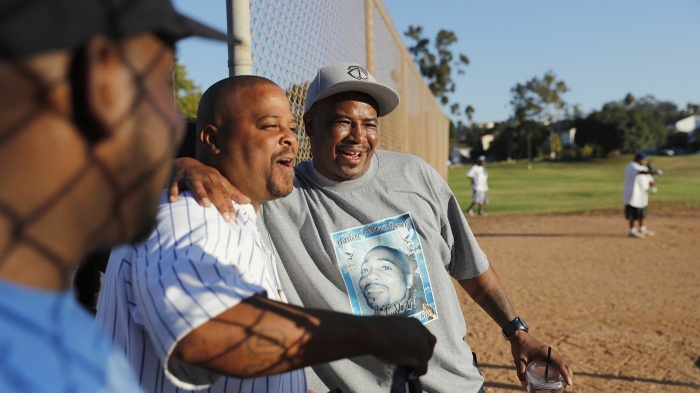 Garry “Twin” Dorton tried to keep young people in South Los Angeles from making the same mistakes he did when he was an active gang member.

He helped them get jobs and stay out of trouble. After a killing, he talked them out of retaliating. He led his neighborhood in a softball league that aimed to build peace among Crips gang members.

But mediating disputes between gangs can be dangerous work.

On July 1, Dorton was fatally shot outside a friend’s house on the 4500 block of South Van Ness Avenue. The peacemaker had become a target.

Los Angeles police on Wednesday announced the arrest of three men in their teens and early 20s — the very group that Dorton, 48, devoted his life to saving — in connection with his death.

Each has been charged with one count of murder and four counts of attempted murder.

On the night Dorton was killed, three men drove by the house on Van Ness about 8 p.m., then parked, detectives said. Two of them walked up and opened fire on Dorton and five others.

Another man was seriously injured and spent weeks in the hospital but is expected to survive. Detectives think Wright and Guerrero were the gunmen.

The shooters were from a rival gang, and they came looking for Dorton, Capt. Peter Whittingham, head of the South Bureau Homicide Division, said at a news conference.

But Whittingham said he did not know why the young men were angry at Dorton, a father of five who was a gang interventionist for the mayor’s Gang Reduction and Youth Development program.

Whittingham called Dorton “one of the good guys.”

“To the extent that you have people like Garry who try to find different ways to bring rival communities together, to find common ways they can come together and break bread and play games and enjoy, as opposed to shooting at each other — that’s what he and others were doing,” Whittingham said. “It’s a tragic situation that some of the very people who he was trying to save, trying to bring prosperity to, trying to motivate and mentor, unfortunately those were some of the same people who took his life.”

Dorton’s grandmother, Eula Montgomery, said that shortly before his death, he came by to wish her a happy birthday. She urged him to go home, but he made a stop at his friend’s house on the same block.

“I always tried to get him to move out of the community, but he loved that community,” she said. “You could always find Garry on that street where he was raised and born.”

At the news conference, many of Dorton’s friends and relatives wore shirts with his photograph embedded in a Milwaukee Brewers glove logo, with “Twin 1” on the back, to honor his leading role in the Crips softball league.

“I’ve been hurting ever since this happened. I’ve not been the same since,” said Dorton’s identical twin, Jerry Dorton. “Maybe I’ll have some closure now.”

If the LATIMES would devote more time to reporting these murders maybe more would get solved.