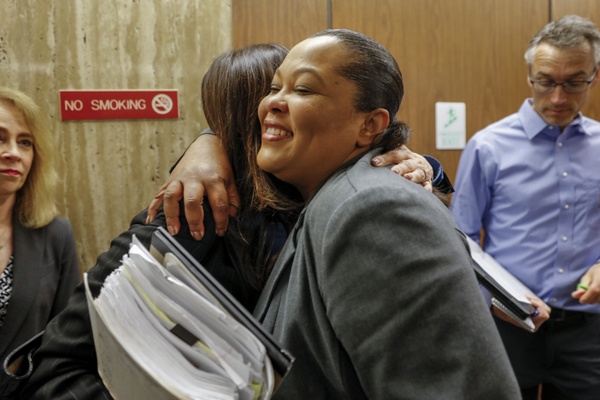 On Thursday, nearly 30 years after the first victim was found sprawled in a South Los Angeles alley, the man authorities believed was the Grim Sleeper serial killer was found guilty of murdering nine women and a teenage girl in a series of slayings that took decades to connect.

The verdict means that Lonnie David Franklin Jr., a former Los Angeles police garage attendant and city garbage collector, officially becomes one of California's most prolific serial killers. The murder counts at his trial spanned from 1985 to 2007, with a gap of 14 years from 1988 that earned him his nickname.

For families of the victims, the jury's decision caps years of anguish over whether Franklin would face justice, and bitter feelings that authorities didn't do enough in the early years to solve the murders.

All the victims were young and black, some leading troubled lives during the chaotic 1980s in South L.A.

Many of the women's bodies were left strewn along a corridor in the Manchester Square neighborhood, their partially dressed or naked bodies — some decomposing — found amid the filth and garbage of alleyways. All had been abandoned without identification, and each was initially labeled Jane Doe.

“They suffered from the same frailties and the same imperfections that all humans do, and they had the same hopes and the same dreams for their futures that we all have,” Deputy Dist. Atty. Beth Silverman told jurors during closing arguments in the trial.

To read the story on Thursday's verdict, click here.

Thank god this freak can't hurt another person--hopefully the prison system eats him alive. I highly recommend the HBO documentary Tales of the Grim Sleeper if you have interest in this case--it gives a better understanding of how this predator thrived on women in need in a neighborhood rife with crime and drugs, in a society rightfully unable to trust their own police department. The court could only prove ten murders but you know this bastard committed more than that.