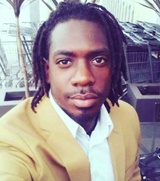 Jascent-Jamal Lee Warren, a 26-year-old black man, was shot and killed Sunday, Aug. 30, in the 300 block of Ocean Front Walk in Venice, according to Los Angeles County coroner’s records.

Officers responded to a call of shots fired in the area and were directed by witnesses to two men who had been shot, LAPD Officer Norma Eisenman said. Warren was pronounced dead at 2:35 a.m. at the scene, according to coroner’s records.

Another man in his 40s who was wounded was taken to a hospital, where he is in stable condition. Police said that both shooting victims were involved in a dispute when someone pulled out a gun and fired at them.

Sris Sinnathamby, the owner of a beachfront hotel near the boardwalk, was charged Aug. 31 with one count of murder in Warren’s death.

Sinnathamby, a 54-year-old Asian man, was taken into custody Aug. 30, according to online sheriff’s department records.

In court, Deputy Dist. Atty. Kristin Trutanich said that Sinnathamby “aided, abetted and directed” the shooting, even if he didn’t pull the trigger. Sinnathamby pleaded not guilty to the shooting, and L.A. County Superior Court Judge Keith Schwartz set bail at $1 million.

In the days since the shooting, flowers, candles and photos have formed a memorial near where Warren died along the boardwalk.

Outside Sinnathamby’s pink-and-turquoise hotel near Ocean Front Walk and Dudley Avenue on Tuesday morning, Kiva Blount recounted what led up to the shooting.

Blount was preparing her bed in the seaside encampment about the time the bars closed, and she said she heard Sinnathamby shout at a homeless man near the boardwalk.

“I don't know what happened, but he snapped,” Blount said.

Warren, whose facility with words earned him the nickname Shakespeare, tried to intervene and ease the tension.

At some point, another man, who had a gun, approached Sinnathamby, and the hotel owner used a racial slur. The gunman began shooting at the crowd of mostly black homeless people, Blount and another witness said.

The gunman fired several shots and stopped to reload, she said.

“He was shooting like a madman,” Blount said, adding that the gunman fled in a dark SUV.

When the shooting stopped, she tied a T-shirt tourniquet around the wounded homeless man’s leg, she said. When she turned to Warren, though, he had already died, Blount said.

Some of the homeless people began beating up Sinnathamby, prompting him to run into his hotel and lock the door, she said.

After police arrived, he was escorted out of the hotel. Sinnathamby was arrested shortly after 8 a.m. at the LAPD’s Pacific Division station, according to arrest records.

Mariah Magomedova, 29, was cleaning the memorial Tuesday morning as tourists ambled by.

She recalled how Warren was the first person to offer her help when she arrived at Venice Beach in May, newly homeless from Tennessee. He showed her how to navigate the often intimidating community, helping her find bus tokens, clothes and other aid.

“He was uplifting,” she said. “He was dedicated to peace and offering spiritual support to anyone he met.”

She and others at the vigil said they weren’t familiar with Sinnathamby. The hotel owner and his staff weren’t known for treating the homeless poorly, some said.

Magomedova said Warren slept on the streets but held a day job. He posted his music to social media, hoping to one day be signed to a record label.

“In the process of working it out,” he said in one song posted online, “but it feels like life’s ills got it out for me.”

Do you have information to share about the life of Jascent-Jamal Lee Warren ? The Homicide Report needs your help. Please fill out this form or e-mail us at homicidereport@latimes.com.

Share a memory or thought about Jascent-Jamal Lee Warren

This was premeditated murder committed by a hit man who openened fire on the homeless at Dudley Court pagoda. Some gangbangers from the Venice crips had been hanging out there and it was dangerous and violent in Venice after dark. That location was where weekly dinners were served and Occupy Venice supporters met. There were many deaths in Venice while I was there. Shakespeare was not a homeless man
He had a girfriend. Was a father an artist and a gr guy as t soul.

Jascent a.k.a Shakespeare was my best friend in this world i miss him evry day that he is gone i think about him 24/7 i made the decision 2 give my child his name it didn't matter if i had a boy or girl so after my babygirl was orn i named her Jascent so his name lives on

Funny. I left my condolences here a few months ago, yet I don't see it anywhere. As a matter of fact, several of the condolences and comments I have made at the LA Times Homicide Report over the last few years have yet to appear!

I love you bro. One of the nicest people at Venice beach and one of the kindest and humblest individuals in the whole world. No more suffering. May your love resonate through us all.
God Bless Jamal and may God rest his soul. One love Shakespeare, I'll see you in heaven my brethren. Peace & Love!

This young man is awsomesauce....he brought light to my life everyday... Gonna miss him...rest easy j always luv ya...shine with the stars like the star you are.cya lata

This young man walked into the Venice Library right around the time of his murder. He complimented my hair and asked if there was someone who could "twist" him up. He also let me know of his writings and how he wanted to take things to the next level, get off the streets, make a name for himself. We exchanged information and then I found someone to hook up his hair. He was a very nice young man. I am sitting over here just shocked with disbelief. He was trying to get his life in order. Rest in Peace young man.

Jay was an amazing individual with a heart of gold. He was a son, a brother, a father , an artist and a friend. He will truly be missed but never forgotten. I will always remember you as the life of the party and thank you for inspiring me to help others, rest in paradise jay.

I remember the first time I met Jay. He was with his best friend, my nephew Antwon. My sister and I were visiting our sister's home in California. I realized quickly that Jay was a special young man. He sang original songs for us, made us laugh and delighted our hearts.
My sister and I sang for him, and joked about becoming his backup singers, when he made it big. I thought of Jay as family....he will always have a special place in my heart. Love Valerie Dixon.