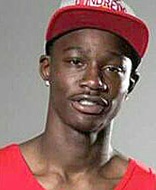 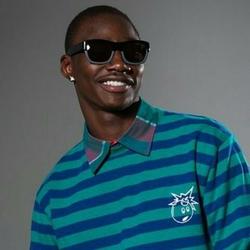 A security guard was trying to calm the arguing men, so the officers pulled into the parking lot to offer assistance, Mendoza said.

The details of what happened next are sketchy, Mendoza said.

When the officers drove up, Briggs was crouched behind a vehicle. “The officers’ attention was drawn to the argument and the security guard, and then this third male [Briggs] shoots his gun,” Mendoza said.

No one was injured, Mendoza said.

Briggs then began running through the parking lot toward Budlong Avenue. As two officers tried to detain him, they opened fire, Mendoza said.

Investigators believe he was struck at least once because when he kept running, he left a trail of blood.

Mendoza said Briggs jumped over a fence onto Budlong Avenue and ran northbound to West 141st Place, then into the 14100 block of Van Buren Court.

Another officer who had been called to the scene spotted Briggs on Van Buren Court and opened fire, Mendoza said.

At that point, Mendoza said, the officers were able to detain Briggs.

Briggs was taken to a hospital where he was pronounced dead at 12:23 a.m. on Feb. 17. The L.A. County coroner reported that he had multiple gunshot wounds.

Investigators are still trying to determine what prompted police to fire their weapons, Mendoza said.

No guns were found where Briggs fell, but investigators did find two guns along the route he ran. Mendoza said investigators believe Briggs threw down or dropped the guns as he was running. It was a cold, dewy night, Mendoza said, but the guns were relatively dry, leading investigators to believe the weapons had been on the ground for only a short time.

Briggs was an accomplished skateboarder, according to a tribute video posted after his death that features a montage of his skating.

“He was very positive, funny and outgoing,” said Poonysha Harris, who called Briggs her boyfriend and best friend in a text-message conversation. Briggs graduated from Fairfax High School, she said, and lived in Baldwin Hills.

Briggs has several skateboarding videos online and had begun performing rap songs as well, Harris said. In 2013 and 2015, he was featured in  promotional videos on the website for clothing company the Hundreds.

After a plea bargain in July 2015, Briggs was sentenced to 210 days in jail for felony hit-and-run, according to Los Angeles County Superior Court records.

In December 2016, he was charged with robbery and grand theft, according to court documents. In that case, Briggs was accused of taking $1,284 in clothing from retailer Saks Off Fifth on Wilshire Boulevard, a spokesman for the L.A. County district attorney’s office said. LAPD Det. Bernard Romero said the robbery charge stemmed from Briggs resisting a store security guard, considered a use of force under California law. Briggs’ preliminary hearing date was to be March 21.

Anyone with information about the shooting is asked to call the Sheriff’s Department's Homicide Bureau at (323) 890-5500. Those wishing to remain anonymous should call Crime Stoppers at (800) 222-8477.

Share a memory or thought about Jimmy Bigges Jr.

They shot my brother and hunted him down a brother that I was looking forward to meeting I am hurting because he didn't have to die and I never got to know him the lapd found him and continued there exciution show me your hands I'm trying to hold in my blood from you shooting me oh you still breathing !!!! Bang bang stop killing black men I love my brother I am still realing in from my sorrow love will win

Daniel Reardon, Boy oh boy where in the hell did you figure committing a crime wasn't against the law because he was a "skater type"? Why the hell do you think we have laws on the books, so that you and him can pick and choose which laws you feel like breaking? What difference does it make it if he took a package of gum without paying for it, it is still theft! Besides just in case you didn't notice, this person was 21 years old not some teenager. How does you mind wrap you ideas around your brain? I really want to know how you think theft isn't against the law. That store owner has already paid for the stuff in that store and loses money with every theft. Oh and since we are categorizing what is acceptable and what is not, I guess this is a double edged sward...you want the police to be held accountable but breaking laws and taking stuff without paying for it, is perfectly acceptable to you. Unbelievable.

This is fishy to me. Jumping fences carrying two guns. If that was true he would have dropped at least one of them right then and there. No one said they saw him shoot a gun. If he did have a gun maybe he fired it to distract the cops, thinking he could out run them and his friends can get away. I've seen that happen before. That is if he actually had a gun on him. Also, bringing up past arrests are usually used to paint the person in a negative light. If you read into his past arrests, they are really just dumb teenage stuff. Hit and run, shoplifting clothes with a trumped up charge because he tried to get away. I can't help but take an interest whenever I see something happen to young skateboarders because people would have you believe they are of a more criminal delinquent type when really their not.

JIMM BRIGGS HOPPIN OUT THE NEW BENZ i barely found out two days ago delistatus4life!!!!!!

I knew Jimmy back in high school. we took Geometry together. Even though he would make fun of me, I knew he didn't mean nothing by it. last time I spoke to him was when I found out he was making skate videos at my college. It sucks to find what happened to him, especially at a time like this. Rest in Peace Jimmy

Somethings funny about this. They say he us crouched behind a car as if hiding then he shoots at officers, Hm also you say they are sketchy about what prompted officers to shoot. If he was carrying a gun and shooting at them that would prompt a shooting by officers. proof read your lies before going to the press with them.

Rest in Paradise. Hoppin out the new Benz in heaven bro

I just stumbled over this while I was doing my daily web surf routine,
after a long day at work and skating with my friends afterwards.
A comment, someone made on a YT skate video led my to find this.
Just sad.
Plus, today we ran into security guards at our spot for rainy days,
who weren't afraid to use brute force and some tear gas. Police came.
I´m not trying to compare or anything, But the experience of this
violence, how fast people lose their sh*t and turn into a wild animal,
made this tragic ending of Jim Briggs weigh even heavier on my heart…

Whoever is out there, grieving,struggling with this - I feel you.

Your are truly missed