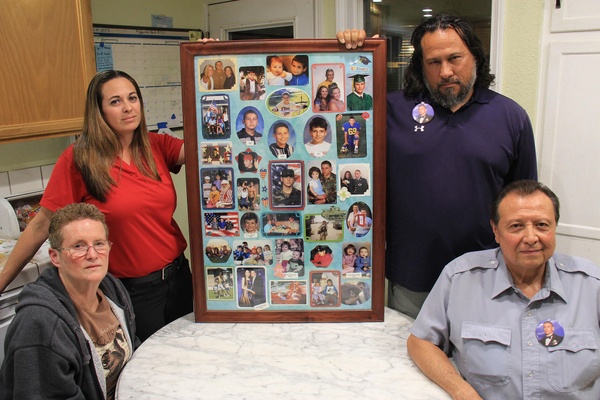 In the fall of 2006, Jesse Lyal Aguilar was just 24, a handsome Army veteran who had served in Iraq, a valued employee of the Automobile Club and the charming youngest son who could always make people laugh.

So when his body was found bound and burned in the trunk of his smoldering car that Oct. 26, the news seemed unfathomable. Grief and disbelief combined with fear and rage and nearly a decade of gnawing questions about who and why, his mother, Nancy Aguilar, said.

“Not only did they kill our son,” Aguilar said. “They gave us a life sentence.”

On Friday, the Aguilar family will travel to a downtown Los Angeles courtroom for a preliminary hearing in Jesse Aguilar’s killing. Investigators will lay out their evidence against the two people charged in November 2015 with murder.

Over the years, Nancy Aguilar and her husband, Frank, found some solace in the Orange County chapter of the Parents of Murdered Children support group. 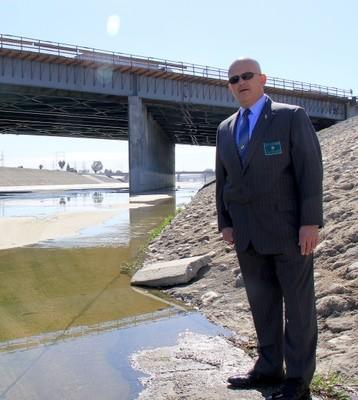 “If he hadn’t had our case, it never would have been solved,” she said. “I know I drove him crazy, calling month after month, but he never gave up, and he never let me give up.”

As the case took shape, the Aguilars began learning disturbing bits and pieces — that Jesse had a side he’d kept hidden, had befriended Silvas and may have started dabbling in drugs.

But the story is still maddeningly incomplete —  the family understands that investigators can’t disclose many details before the hearing — but the arrests have given Jesse Aguilar’s family their first hope for closure, said his older sister Francine Aguilar.

“I don’t think I’ve been able to fully mourn him because there’s been so many unknowns,” Aguilar said. “I’ve been stuck in this dark room for 9½ years, but for the first time I can finally see a light at the end of the hallway.”

Nancy Aguilar learned her son was missing when his fiancee called at 5:20 a.m. on Thursday, Oct. 26, to say he hadn’t come home the night before.

Calls to his cellphone went to voice mail, and calls to hospitals and police departments yielded nothing.

The authorities found Jesse Aguilar’s car that evening in South Gate about 6:20, Lugo said, tucked under the 710 Freeway in the concrete expanse of the Los Angeles River bed, about 30 miles from his office and 17 miles from his La Habra home.

Investigators believed the fire was deliberately set, probably the night before, but they didn’t know when or how long the car had burned. Later, Lugo said, a cyclist would tell investigators that he saw the abandoned, smoking car around noon that day as he was riding the trail along the river, but the Fire Department often conducted practices in that area, so he figured it was left over from a drill.

When investigators opened the trunk, they found Aguilar’s body with his feet bound and his hands tied behind his back. The death certificate listed the cause of death as deferred, with “thermal burns (charred), sharp force head injuries and other undetermined factors.”

One thing that haunts the family most is that Aguilar may have been alive when the car was set on fire. That’s something they hope will be answered when the medical examiner testifies.

Nancy Aguilar insisted on going to the riverbed the evening after Jesse Aguilar’s body was found. The area was desolate.

“You had to know how to get in there,” Nancy Aguilar said. “It was such an ugly, ugly place, with no lighting. It was so dark. I got scared.”

Today there are fenced vacant fields along the trail and a new high school on Tweedy Boulevard, just a block away.

The authorities insisted on a sealed casket, Frank Aguilar said, so his family never saw the body. That just deepened the mystery and their paranoia, said sister-in-law Vicki Aguilar.

“Your brain goes crazy, wondering, ‘Who did it?’” Vicki Aguilar said, adding, “It was just really upsetting to think that somebody could just grab somebody and go kill them.”

On Friday, Jesse Aguilar’s family hopes for answers, but their court visits are just beginning. After the preliminary hearing, the judge will decide whether there’s enough evidence to go to trial, and that, Lugo said, could easily be another year away.

Since when can a police department enforce how they'd like a funeral to be performed, and how can they prevent the family from seeing the coroners report?
If this were a Jewish family, they'd be all up on this, stating exactly how the burial would be handled and so forth, so how is it that this family has been dictated to like this?
Unbelievable!
My heart goes out to this family.

First off let me say this...I could honestly say i could not and will not commit such of a down right sickening act against my WORST enemy in this world!..This makes me sick knowing that there is people on this earth that go to a level of such disturbing acts! No one deserves to die this way no matter what they did..it can't be justified by any means,I would say they need to be put to death but they are death lifeless dust,Satan's offspring. sickening to the 10th degree. I would like to send my condolences to the family I will pray to GOD and ask him to redeem Jesse's soul so his love ones can see him again in heaven. My aunt was killed the same way about the same time in the Florence Graham area..Not too far from where this happened that's why it hits me hard and angers me.Just trust in God to get rid of this plague of trash that dwells among us in darkness Psalm 34:21-22 Evil should slay the wicked and those who hate the righteous shall be condemned. The lord Redeems the soul of his servants, And none of those who take refuge in him will be condemned.Think about it! Thank you and God bless you.