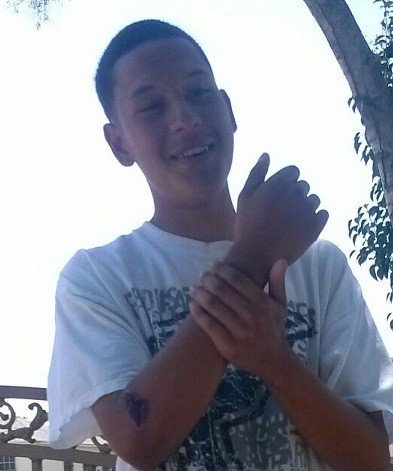 Ibarra and three friends were walking south on the sidewalk around 6 p.m. when the group was approached by two male Latinos from opposite directions, said Lt. Dave Coleman of the L.A. County Sheriff’s Department.

One of the two pulled out a handgun, pointed at Ibarra and fired four to six shots, Coleman said. Ibarra died at the scene at 6:26 p.m., said Ed Winter, a coroner’s spokesman. No one else was injured.

Ibarra lived in the area and did not have gang ties, Coleman said.

Do you have information to share about the life of Juan Manuel Ibarra ? The Homicide Report needs your help. Please fill out this form or e-mail us at homicidereport@latimes.com.

Share a memory or thought about Juan Manuel Ibarra

Damn it feels like just yesterday you were chasing and I fell and knocked my teeth out. I MISS YOU BIG BRO💙

this kid i new him. before he pass away . he was hanging out with the wrong crowd . he didn't deserve to die by some coward trash members , but the kid should of look for different role model . r.i.p refer

WARNING: Be very careful where you step in Compton, CA. This wretched city is littered with banana peels.. It's real easy to get caught slippin'.

Manuel was my nephew who was cheated.he was supposed to be starting his life. He and his family were robbed. We love you meno and miss you every day

I Miss You Like Crazy Meno You Will Always Remain In My Corazon <3 I Truly Miss Kickinq It With You All The Time v.v And Walkinq With You Everywhere We'll Soon Meet Aqain R.I.P My Guardian Anqel Manny <3
-love Your Bestfriend Favi (:

Does anyone know how to fight anymore? back in the day someone would have gone home with a black eye or busted nose. Now a days cowards use guns and not their fists ...rest in peace Meno

"Im sorry" but it says "share a memory or thought about Juan Manuel Ibarra" not "share your thoughts and judgement on the victim and the family" thank you and RIP LIL BRO :-*

qod Took You Away A Little Too Soon Meño :\
But Only He Know's Why ,
We Truly Miss Yoou 'Bluuuh'
I Misss Thaat Sexy Smile Of Yours That Voice Uff
But Until We Meet Aqain My quardian Anqel
i Loveeeeee Yooooou <3

I'm sorry but the victim and half brother look like thugs, the gangsters that killed the victim might have been gunning for either one of the brothers and just happen to catch Juan slipping thats why no one else was shot just him, or maybe his friends set him up.

RIP juan aka meño we love you bro we miss you like crazy you are a good kid didint deserve to die but God takes the innocent first see you soon bro xoxo!