Family seeks answers in killing of grandmother in Del Rey: 'We were not ready to lose her' 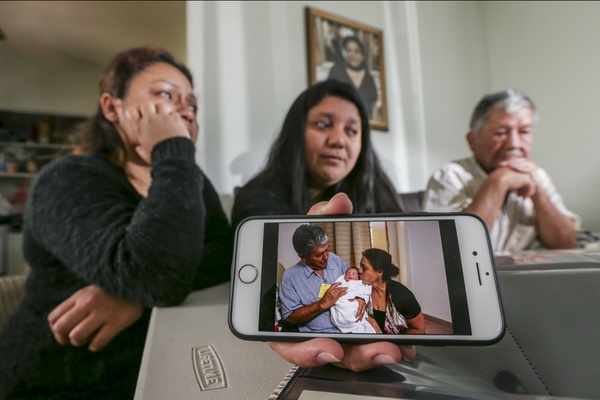 In the days after Herminia Galvez-Sandoval’s mother was found dead in the parking lot of the Mar Vista Gardens housing development, her 5-year-old son had been crying and asking for his grandmother more than usual.

The funeral would be in three days, and Galvez-Sandoval had to tell him. There, in the hallway of her Inglewood home, she broke the difficult news. Grandma, she said, is in heaven.

For Galvez-Sandoval’s family, there aren’t many more details in the killing of Juanita Sandoval. On the night of  Feb. 17, Sandoval, 56, was found by a resident in a rainy parking lot in the 4900 block of Marionwood Drive with blunt force trauma to the head, police said.

Investigators have not yet ruled out robbery as a motive and are looking for more people to come forward about what they may have seen. Last week, the City Council approved a $50,000 reward that Los Angeles Police Det. Angel Gomez hopes will spark tips.

Gomez, who previously worked in the area as a gang enforcement officer, said people who live in the project of about 600 units are concerned.

It has been two years since someone was killed there, and Gomez has recently attended several community meetings to urge cooperation from residents who may be afraid to talk to the police.

“Any little piece that we can put together … would be great,” he said.

It’s unclear whether any of the cameras in the housing development hold clues to the slaying, Gomez said. Police are still reviewing the footage.

The president of the Resident Advisory Council at the project said residents, some of whom are living in the U.S. illegally, are afraid and reluctant to come forward. William Escalera, who has lived in Mar Vista Gardens in Del Rey for about five years, added that security has been a problem in recent years. A security gate at the entrance to the project is broken, some of the cameras don’t work, and residents often complain about broken lights, he said.

Dora Rangel, a resident of five years and the secretary for the Resident Advisory Council, said she was neighbors with Sandoval and would sometimes watch her grandson.

“We’re trying to get information, but nobody wants to talk,” Rangel said.

Sandoval’s family is puzzled why someone would hurt the 4-foot-11 grandmother, who came to the U.S. from Guatemala more than 30 years ago.

Sandoval was known for her sassy sense of humor and her ability to nurture. She was a friendly presence, one who frequently donned a scarf and high heels to boost her petite frame.

For Maritza Galvez-Sandoval, 24, one of her first memories of her mother is one of generosity. When Maritza was young, she remembers driving home late one night through South Los Angeles. Her mother spotted an elderly woman waiting at a bus stop and told her she would give her a ride home.

“I know that wasn’t the first time, and it wasn’t the last time,” said Maritza Galvez-Sandoval.

Sandoval’s husband, Juan Galvez, 73, said he misses his partner of more than 30 years.

The recent tragedy is not the first for the family. In November 2003, the oldest daughter, Johanna, then 24, was killed in a car accident in Guatemala along with Sandoval’s parents and a cousin.

Only recently did the family feel as though they were starting to recover.

“My mom was the energy, the flavor. In reality, they ruined our lives. We were not ready to lose her,” she said.

The sisters say their mother wouldn't have remained silent if she'd witnessed a crime.

“You never know who is listening, who is watching,” Herminia Galvez-Sandoval said. “We want people to come out.”