Mother of 18-year-old killed in Gardena: 'There has to be a reason that this life is gone.' 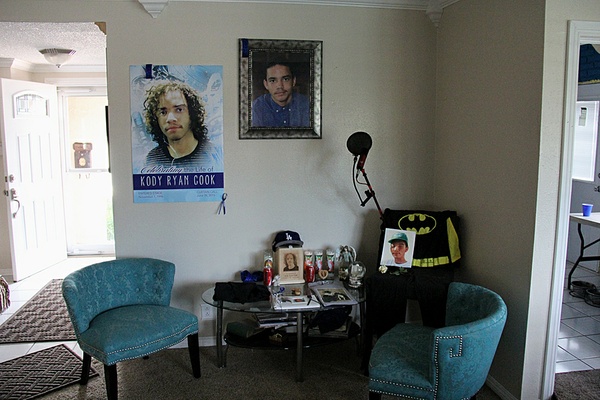 Diedre Cook sat in her living room surrounded by photos of her family, faltering as she tried to explain about her dead son Kody.

Without a word, her husband, William "Kevin" Cook, stopped pacing and brought her a handful of tissues.

It is still difficult for the couple to talk about -- and comprehend -- the shooting death of their 18-year-old son last month blocks from their Gardena home.

"It didn't matter how I raised him, or how much I loved him, if someone else's child who lived with very different values could just wipe it away," Diedre Cook said.

Two 17-year-olds have been charged in Cook's killing -- one on suspicion of murder and one on suspicion of accessory to murder -- according to prosecutors. Police say that as Cook was dropping a friend off at his home July 26, he exchanged heated words with two teenagers before driving away.

Twenty minutes later, the same boys allegedly walked up to Cook's car as he was parking outside a Baskin Robbins and shot him multiple times. Police said that Cook didn't know his alleged attackers, who fled after the shooting and were arrested 10 days later.

The suspects have not been identified because they are juveniles. Both turn 18 in the fall, said Greg Risling, a spokesman for the Los Angeles County district attorney’s office. A hearing Aug. 11 will determine whether the suspect who is charged with murder will be tried as an adult.

“What has your life looked like if you would even consider taking someone else’s life over an argument, at the age of 17?” Diedre Cook said. “I just don't understand this. There has to be a reason that this life is gone. It’s incompatible to have all this love for my child close to the anger I have for the people who took him away from me … it just feels wrong.”

Diedre Cook, a mother of four, is a doctoral candidate in neuropsychology who home schooled Kody rather than send him to local schools, around kids and lifestyles she didn’t approve of. The two were very close, she says, and when Kody started rapping, he took the stage name “Lecturre,” because lectures are how she parents.

“I’m always talking to my kids about thinking different than the world,” she said. “I taught Kody not to look at the surface, but for the deeper meaning. We had very old-fashioned values for our children."

They emphasized manners and respect, Diedre Cook said. Kody even had a curfew; until he was 16, he had to be in before dark. His parents described their son as charismatic, creative and independent. They said that even when he was young, he drew people to him and loved to make others laugh.

The family tried to honor Kody's humor and style in the shrine they created near their front door. His ashes are there in a wooden urn, etched with a photo Diedre took on a family cruise to Alaska, less than two weeks before he died.

Surrounding the ashes are mementos like the microphone Kody used for recording and the Batman pajamas he wore around town because he thought they were funny.

Kody may have been home schooled, but he met people everywhere:  Through his charity work with the Free Masons’ Demolay youth group, his siblings’ school functions and working at the new Fuddruckers restaurant in Santa Monica. 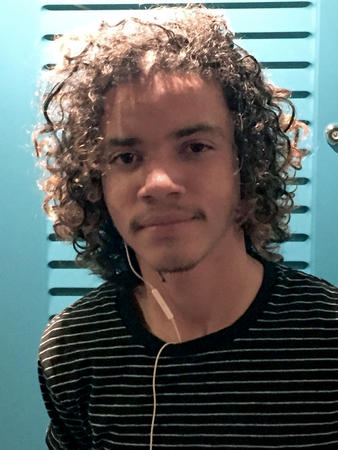 But Kody's passion was his music. Kody liked to protect her, Diedre Cook said, so he was shy about sharing his songs because they had curse words.

"He never cursed around me," she said.

Kody was determined to be a rapper, said his musical partner and close friend Javon Bryant, who used the stage name Javon Beretta. He and Kody were the creative force behind their group, Political Zoo.

They grew up just two houses apart, on a cul de sac of well-kept homes, and made most of their music in their bedrooms, far from the hard life featured in many rap songs. They recorded many songs, but were proudest of their most recent release in April on YouTube, called “Golden.”

The lyrics, written by Kody, are explicit in places, with hard talk about taking over, and the jarring pop of gunfire, but Javon says Kody meant taking over the music world, not rival gangs.

“He didn’t have guns and he wasn’t a thug,” Javon says. “It’s weird now, hearing him rap about guns and then getting shot,” but at the time, the song didn’t seem ominous.

Kody was “an amazing person, the best friend I’ve ever had,” Javon said, but even he was surprised by the size of his funeral. Nearly 300 people attended, Diedre Cook said, crowding into the lobby and along the walls because there were no more seats.

"We didn’t know half the people who came, people of all colors and ages, for a kid who was only 18 years old," she said.

It was just part of Kody’s vibe, said his Demolay friend Habib “Jake” Jahsham. The funeral really captured Kody's spirit, he said, through all the jokes and stories people wanted to share.

Photo, above: The Cook's living room, with mementos of Kody. Credit: Jeanette Marantos, For The Times. Photo, below: Kody Cook on a cruise to Alaska. Credit: Diedre Cook

May God grant him peace and also grant peace to his family. So very sad for such a great loss. I will pray for your comfort and may those that choose to commit such a horrible act, be delt with accordingly.

I know the feeling my baby bro was murdered in garden as well in 2006, on marine and Crenshaw, the person or persons who did this horible thing to my brother has never been caught its now a cold case, my prayers go out to your family i hope justice wil be served.... Im waiting for the day my family can have some kind of justice ...... For my brother EDWARD WRIGHT....

My heart goes out to these parents. Raising your child to have a heart in a world where many hearts are cold. Life is cheap these days.