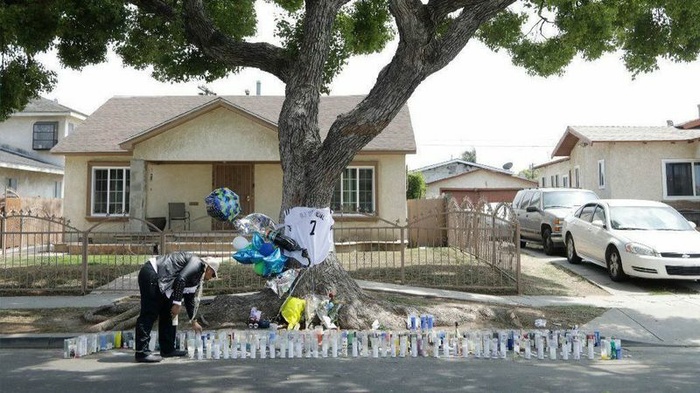 Shortly after 4 p.m., Wakefield was sitting in the driver’s seat of a black sedan with a friend when a vehicle drove by and a person inside shot at them, police said.

Both men were wounded – Wakefield fatally. Police said no suspects have been identified.

His grandfather, Lee Carter, was mowing the lawn of the beige stucco home he’s lived in for more than four decades when he heard pops.

Paramedics took Wakefield to a hospital, where he later died. His family said that Wakefield was on an upward trajectory in the music business. He was known as DJ Official and worked with artists such as Ty Dolla Sign, Tyga, Cardi B and others.  He was a father to a newborn son.

“I want to know who killed my son,” she said. “They just took my world.”

Wakefield got his start in music by deejaying parties with his friends in high school.

After graduating in 2010, he began working with rapper Joe Moses and the two went on three U.S. tours together.

“He was my producer, but over the years he became one of my best friends,” Moses said.

What stood out to Moses about Wakefield was his dogged work ethic.

“He wasn’t someone who didn’t know what he wanted to do in life,” Moses said. “He just wanted to make music to help take care of his family.”

As Wakefield became more popular, he never let fame go to his head, his friends and family said. He worked on Cardi B’s “Invasion of Privacy,” which won this year’s Grammy for best rap album, his family said.

He signed with 10 Summers Records, founded by DJ Mustard, the label confirmed. He was earning more royalties from his work and hired a lawyer to help him navigate the legal hazards of the music industry, his mother said.

“This was his time to shine and somebody took it away from him,” Vera Carter said.

In one of his last Instagram posts, Wakefield mourned the killing of rapper Nipsey Hussle, whose death also shocked the music industry.

Wakefield’s family said he had worked with Hussle, born Ermias Asghedom, shortly before he was shot in front of his Hyde Park clothing store on March 31.

Ty Dolla Sign wrote an emotional post on Instagram about Wakefield, calling him “a father, a successful producer, a solid homie who meant a lot to all of us.”

DJ Mustard also paid his respects on social media, saying in a recent post that Wakefield “wasn’t trying to do the right thing, he was doing the right thing.”

“Everyone can’t understand, why would someone want to do something like this,” she said.

Her son’s routine was simple, his mother said. Wakefield spent most of his time working in the studio and hanging out with his girlfriend and son, who was born Jan. 30.

Arri Flournoy has known Wakefield since high school when he played music at parties. Each day after leaving her job, she comes to the scene of the shooting to pay her respects, tending to the growing tributes left by fans and organizing candles to spell out “DJ Official.”

The two were planning a joint birthday party next month, when Wakefield would have turned 27.

When he became more well-known, he didn't leave his group of high school friends behind, Flournoy said.

"If anything, he was taking us with him," she said.

Do you have information to share about the life of Leslie Andre Wakefield Jr. ? The Homicide Report needs your help. Please fill out this form or e-mail us at homicidereport@latimes.com.

Share a memory or thought about Leslie Andre Wakefield Jr.

"There is something behind these murders and shootings and growing up in california in the early 80's and knowing the gang culture first hand this is not gang actitives" Well Said Pops and I have believed the same thing for a long time. Like Chicago the number of murders just does not fit in spite of what is reported. You never know what devilish plot some group are groups have cooked up to gentrify these communities among other things. Nevertheless; My heart goes out to the young brother and all of our folks. I love you guys so let's be vigilant and stay off each others backs. Keep your head on the swivel and keep the community informed concerning any weapon formed against us.

Sad that LA has become a hunting ground for young african men in the music industry, Nip Hussle, Dj Offical, and last night Slim 400 was shot 10 times and is in bad shape. First allow me to send my condolences and prayers to all the families of the fallen soldiers above, May peaces and blessings be unto you all in these times. There is something behind these murders and shootings and growing up in california in the early 80's and knowing the gang culture first hand this is not gang actitives this is more LAPD, and Someone in the music industry either pissed these gentleman not signed with them or someone is scared of another Death Row Records. Not perse the DRR, but the magatuide of DRR, the money that was made and the talent that was there and not make the mistakes that death row made. So i say just look families who has approched your love one about maybe signing or working at a different company or working if independant, or over hearing them speak of the above. This is not gang related i promise you, this is way bigger then local gangs. Just think any conversations of someone approching or offering something other then what they were doing or working on or with and it going to show you all whats really happen in LA. ..... Peace and Blessings

Wow! Another inocient victim loss to gun violence! This is sad! This violence needs to stop because we're losing our younger generation! This is sad and depressing! My condolences goes out to this family 👪