Man sentenced to 90 years in killing of Venice youth pastor 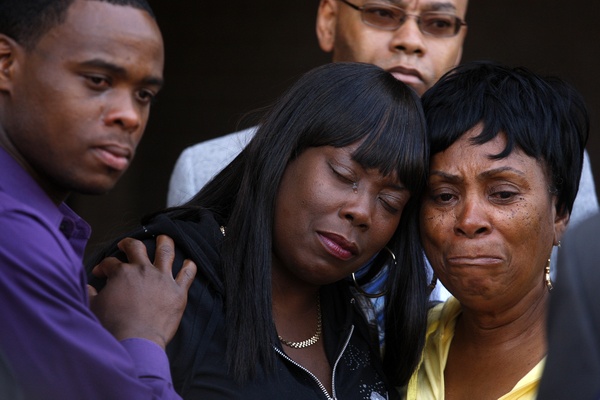 Curtis Nettles wasn't going to speak at the sentencing for one of his brother's killers. But he awoke in the middle of the night talking in his sleep, and he took it as a sign.

He stood at a lectern in a courtroom on Wednesday and said that if he didn't speak, he might regret it. So he detailed how the killing upended his family.

Nettles, 34, said he missed his brother, Oscar Duncan, 23, who was gunned down in front of his Venice home by gang members in June 2012.

But, Nettles added, "everything is perfect, according to God's plan."

"Through this we got stronger," he said. "We may not get over it, but we get through it."

Hopeton Parsley, 25, and Kevin Green, 31, were each convicted of murder in February. Wednesday's sentencing was for Parsley; Green is to be sentenced June 5.

Prosecutors said that the men, along with two others, were on a "crash and burn" mission in rival gang territory.  Nichole Sheran, 21, pleaded guilty to voluntary manslaughter in the same case. He is to be sentenced June 24 to 11 years in state prison.

That night in 2012, the group pulled up to Duncan and his girlfriend and cat-called the woman. They then shouted "Venice Shoreline!" Duncan approached the car to see who was inside and was shot.

Duncan was a role model in the Venice community where he grew up. At a young age, he decided he wanted to become a pastor. He worked at the Boys and Girls Club as a counselor and helped teens stay on the right track. He also was an aspiring musician who went by  the nickname "Choirboy."

"The law of the land has done its job," Nettles said in court. "True justice, time will tell."

Duncan's family wore black T-shirts with his photo plastered on the front and back and the letters J-O-E. The acronym -- for Jesus over everything -- was one of Duncan's favorites.

"We are still really trying to hold it together and get back on the right track," said Elaine Clark, Duncan's aunt.

Donald Coulter, Duncan's stepfather, said Duncan would have likely told the men in the car that night to join the gang of Jesus Christ.

"I pray and I challenge Mr. Parsley to change his life," he said.

Others, such as cousin Lanee Burns, read letters from those who could not attend the sentencing, including Duncan's sister and father.

"Not only our family lost, but his family lost too," Burns said of Parsley.

Before Windham handed down the sentence of 90 years in state prison, he said he took the family's statements to heart.

"My regret is I never got to meet Oscar Duncan," he said. "It seems a great life was taken from our community too soon."

Photo: Curtis Nettles, left, comforts his mother, Beverly Brown–Duncan, along with other family members at a 2012 news conference announcing a reward in his brother's killing. Three people have been convicted in the killing. Credit: Genaro Molina / Los Angeles Times

Rest easy Oscar bro its crazy how life work all the hard work you did all the stuff you avoided led to this just the no the "V" miss you bro and we aint never forgetting about you you set a stamp and thats fasho. Just touch are community and all the other community's out here which you probably already trying to do. All this is still unbelieveable out of all people. I can go on and on but it wont bring you back just look over ME and yo fam brodie we need you and we hurting but we gone stay strong and positive and let the lord pave a way for all this like you would want. RIP OSCAR see you when i get there V's.