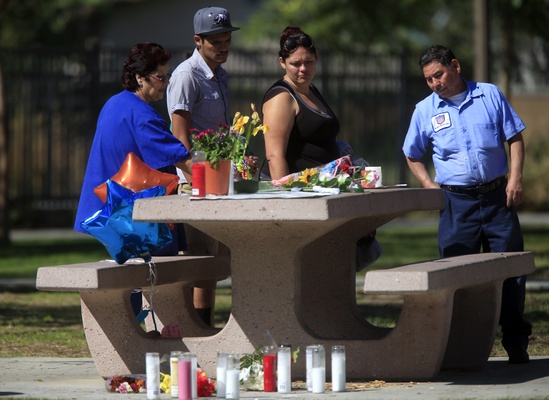 A 52-year-old man was found guilty Wednesday in the fatal stabbing of a schoolteacher who was attacked in front of her students at a Long Beach park in 2013, according to the Los Angeles County district attorney’s office.

A jury deliberated for less than a day before convicting Steven Dwayne Brown of first-degree murder, said Sarah Ardalani, a spokeswoman for the district attorney’s office. Jurors also found a knife allegation to be true.

On Oct. 11, 2013, Kellye Taylor, 53, was sitting on a folding chair at Orizaba Park watching her students play when Brown walked up and stabbed her with a 7-inch kitchen knife, prosecutors said.

Taylor taught at Huntington Academy, an elementary school close to the park. Brown was the boyfriend of Taylor’s daughter, Tia.

In March 2013, the county gave Taylor custody of five children ages 2 to 17 who had been living with Brown and Tia Taylor.

Brown is the biological father of three of the five children Kellye Taylor had in her custody. He was furious about having the children taken away, according to a lawsuit he filed in July 2013 against Long Beach police, the Los Angeles County Department of Children and Family Services and several social workers.

He placed much of the blame on Taylor. In court papers, he referred to her repeatedly as an "informant," even writing the word in the margins of documents he filed with the court.

He claimed she told social workers that he was an unfit parent and advised her daughter that she would be "better off without Steven Brown."

“He killed her because he hated her and he hated the way she took care of his children,” Deputy Dist. Atty. Diana Martinez told the jury during closing arguments.

The defense argued that Brown was suffering from mental illness and that he believed Taylor was pulling a gun from her purse. Prosecutors, however, said there was no evidence of a purse or a gun.

"Justice did prevail," she said Wednesday. "The jury did their job based off the evidence that was presented."

"We just miss her presence," she said.

Their mother, who died in October 2015, was hoping for justice, Bryant-Henry said.

"She would be glad to know that justice did prevail," she said.

Brown faces up to 86 years to life in prison when he is scheduled to be sentenced March 4.