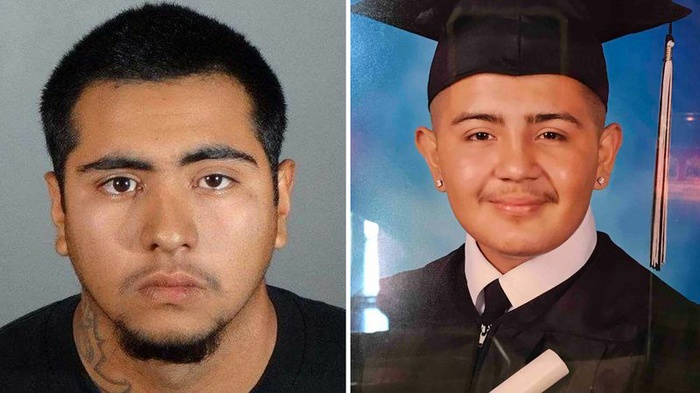 A 20-year-old man and a 17-year-old boy have been charged in the February shooting death of a high school athlete and honor roll student in Gardena, authorities said.

Marcos Medina, 20, was charged June 3 with murder and possession of a firearm by a felon, according to the Los Angeles County district attorney’s office.

Medina has not yet entered a plea; he is due back in court June 25, prosecutors said.

Police declined to say how the suspects were identified, citing the pending court case.

Police previously told The Times that about 7 p.m. Feb. 22, David Amaro-Poblano, 17, was shot while walking toward a home near West 146th Street and Halldale Avenue.

Investigators think David was mistakenly targeted as a member of a rival gang, though he had no such affiliation.

David was delivering invitations to friends and family for his sister’s ninth birthday party at the time, and his girlfriend and mother were nearby.

During a news conference shortly after the shooting, David’s mother, Delia Poblano, said that right before her son collapsed from being shot, he said, “Be careful, Mama.”

A $15,000 reward for information leading to the arrest of the suspects in the killing was issued by the city. No one has been given the reward, as the case is still under investigation.

David, a soccer player, was a senior at Environmental Charter High School in Lawndale. He had made honor roll his last semester and completed more than 80 hours of community service.

For his senior thesis, David was researching solutions to improve living conditions for people serving time in detention centers.David was set to attend Cal State Dominguez Hills upon his graduation from high school.

Photo: Marcos Medina, left, one of the suspects in the Feb. 22 killing of David Amaro-Poblano, is seen in a photo released by Gardena police on June 4. At right is a photo of the victim posted to a GoFundMe page for his funeral expenses.

No words can express how much this complete disregard for human life can ruin so many lives at one time, and in a few minutes. We see numerous families torn apart forever by the actions of men who were just teenagers not so long ago. May God help the parents heal enough to teach others and to take the time that is needed to keep your kids off the streets.
The solution is not simple. We all must work to support our families.
Our kids are faced with peer pressure and are easy targets for gang recruitment.
If we see a kid heading in the wrong direction, ask where he lives and see if other kids can help by asking him to play some basketball, or some type of activities that will keep them from being a target. If we don't do our part then so many more young lives will be stolen from us. Communities must stay strong and protect Our Children.
It's not my kids, or your kids, it's "Our Kids".
It takes a community to raise a child.