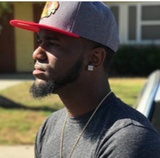 About 11:05 p.m., Hemphill was at a gathering with a group of people when numerous shots were fired, said Los Angeles Police Det. Nathan Kouri.

Three people, including Hemphill, were injured. A vehicle may have been involved in the shooting, Kouri said.

Hemphill was taken to a hospital, where he was pronounced dead at 11:29 p.m., according to coroner’s records.

The other two people are expected to survive.

Do you have information to share about the life of Michael Deon Hemphill III ? The Homicide Report needs your help. Please fill out this form or e-mail us at homicidereport@latimes.com.

Share a memory or thought about Michael Deon Hemphill III

I worked with gangs 35yrs to get them out I should have done more it is the innocent blood that causes other people threw pain to join and revenge the question can we heal the pain o ly the Lord using us to give kindness and resources can help wake up we need churches and all to awaken.

So sad, I knew of you, but I didn't know you personally, we followed each other on social media tho, and you always had me rolling. R.I.P. Mike Mike

I wish I got the chance to meet you, your posts use to have me laughing all night Rest In Peace 😔