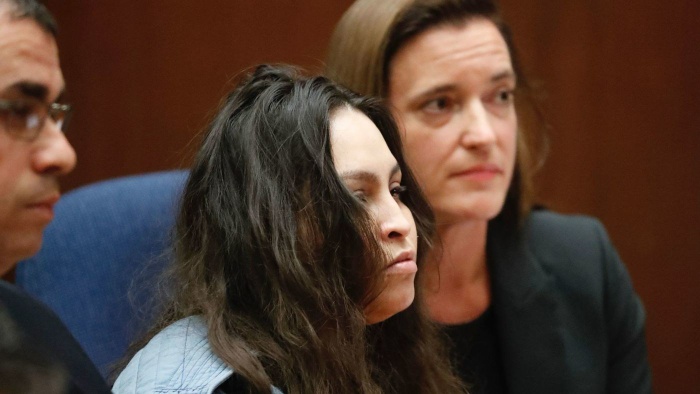 In a downtown Los Angeles courtroom on Feb. 15, Pearl Sinthia Fernandez admitted that the 2013 killing of her son Gabriel was intentional and involved the infliction of torture.

Her guilty plea avoided a trial, where prosecutors were expected to seek the death penalty. Fernandez's defense lawyers had opposed capital punishment, arguing that her low IQ made her ineligible for death row.

A judge is scheduled to sentence her on June 7 to life in prison without the possibility of parole.

Shackled at the waist and wearing a jail-issued smock, Fernandez, 34, spoke in a faint, muted voice as she accepted the conditions of the plea agreement.

Prosecutors said Fernandez's defense lawyers inquired about a guilty plea on Dec. 14, one day after jurors recommended that her boyfriend, Isauro Aguirre, be executed for his role in the boy's death.

"The paths of justice are always different," Hatami said afterward, noting that most cases do not go to trial.

Without a trial, Carranza said, she and her family could avoid another painful review of the brutal abuse that Gabriel endured, including graphic photos and reports of the child's injuries.

When paramedics arrived at the boy's Palmdale home on May 22, 2013, Gabriel was unconscious and had a cracked skull, broken ribs, burned and bruised skin, missing teeth and BB pellets lodged in his groin. He died two days later after being removed from life support.

The death led to unprecedented criminal charges against L.A. County social workers who allowed Gabriel to remain at the home despite six investigations of the mother and numerous reports of the boy's injuries.

Sheriff's deputies also visited the home multiple times in the months before his death, and prosecutors said in court papers that some of the deputies later were disciplined in connection with their response.

The killing galvanized calls for reforms in the way the county oversees abused and neglected children. A blue-ribbon commission set up by the county Board of Supervisors recommended "a fundamental transformation of the current child protection system."

The board responded by setting up a new agency, the Office of Child Protection, which is charged with improving how children are treated.

Among those who reported Gabriel's abuse was Jennifer Garcia, a first-grade teacher at Summerwind Elementary School, who said he came to school with bruises and swollen eyes.

She first became alarmed when he asked "a simple question," she said.

Five years later, Garcia said, the sight of Fernandez in the courtroom still made her angry.

"She got what she deserved. She deserves worse, but …. even if she got the death penalty, we don't execute," Garcia said.

During Aguirre's trial, Hatami, the prosecutor, told jurors that in the months leading up to the boy's death, the defendant had reveled in his brutalization, forcing Gabriel to eat cat feces and his own vomit.

The boy slept in a small cabinet, the prosecutor said, with his ankles handcuffed, his hands bound and his mouth gagged with a sock.

"No human with a heart and soul could do that to an innocent little boy," Hatami told jurors, arguing that Aguirre hated the boy because he suspected he was gay.

Aguirre's defense portrayed Gabriel's mother as something of a mastermind of the boy's abuse, but prosecutors on Thursday disputed that argument.

"They both pointed fingers at each other," Hatami said. "The evidence showed, and our office believed, that they were both culpable."

Aguirre was convicted of first-degree murder on Nov. 1.

A jury recommended the death penalty. He is scheduled to be sentenced March 8.

The fallout from Gabriel's murder has been felt well beyond the county. The decision by prosecutors to charge the four social workers with felony child abuse and falsifying public records sent a chill through the ranks of child protection workers nationwide.

At a court hearing for the social workers last year, a judge said that their actions amounted to criminal negligence, adding that in the months before the boy's death "red flags were everywhere." They have pleaded not guilty.

For Carranza, the years since her young cousin's death have been tough, filled with anger, guilt and pain.

When reporters asked her how Gabriel, if he were alive, would look at his mother, she did not hesitate.

"He'd still love her," Carranza said. "Every child, no matter what, they're always going to love their parents."

I feel that the boys mother should have gotten the death penalty as well. I don't believe that she was just as guilty as the boyfriend. She knew every time that this child was being badly abused and tortured by her and the boyfriend and did nothing as a loving mother would do to stop it. In my eyes neither one of them know what real love is. I just don't understand why Law Enforcement turned a blind eye to what was happening to this child. Why is there all these Law Enforcement and Child Services to protect children and they keep turning a blind eye to what is happening. They deserve to lose their jobs. By not protecting this child, they were just as bad as his mother and boyfriend for this poor child's abuse and death. At least God has him and he will never be abused and tortured ever again. He will get all the love and protection that he had always deserved. May he rest in peace. ----Deborah M. Frisby

Hi, A horrible mother, a horrible boyfriend. The social workers did not protect the little boy. Why be a social worker if you are not going to look out for a defenseless child? Eugenia Renskoff

I have raised four sons. And every time I read a story like this, it makes me sick to my stomach!!! I personally cannot see how anybody can do something like this to any child, especially their own children. To me, they have to be absolutely sick in the head.

The last sentence of this article is wrong. If you abuse and torture your child enough, they will stop loving you. If that child doesn't get years and years of therapy, what you will have raised is another parent who abuses. It's a never ending circle. I pray for Gabriel, that he rests in peace at last.